The 11th edition of the Africa Eco Race fulfilled today its day of rest in Dakhla, in the south of Morocco. At a time when five of the 12 stages of this great African marathon have already taken place, the Bio-Ritmo® team progresses for the second week of the rally, which takes place mainly in Mauritania, in 1st place among the trucks and in the 7th place in the joint auto / truck standings. Having enjoyed this day near the beach, the Portuguese took the break to review the mechanics of the MAN TGS of competition and to adjust the strategies for the days that follow.

Elisabete Jacinto, who is preparing to compete tomorrow in the Mauritanian tracks where the sand paths predominate, makes a positive evaluation of the first week of the race: « the stages in Morocco are always very difficult and tiring because the courses are very hard. We had some problems, but nothing that disturbed us much or that made us waste too much time. We are pleased with the results achieved, particularly because we have worked hard to get ahead of these very competitive trucks. For the next few days we don’t know what to expect because Mauritania is always a surprise. But we will do our best and hope that everything goes well », said the Portuguese driver. 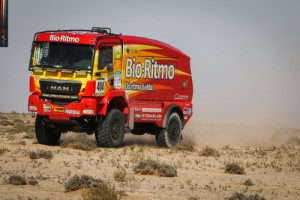 Elisabete Jacinto, José Marques and Marco Cochinho stood out in this first week of the race by fighting hard for the first place with their most direct opponents, the Belgian Igor Bouwens and the Czech Tomas Tomecek – who has won for three times this competition. From the beginning, the Portuguese were very reliable by reaching three places in the first stages of the Africa Race which allowed them to rise to the top of the category after three days. But it was on the fifth stage that they most stood out by being the fastest among the trucks. The Portuguese trio showed all their competitiveness by producing a fast and efficient progression that allowed them to ensure, at the end of a week of competition, the 1st place among the trucks and the 7th position of the overall classification.

Behind the Bio-Ritmo® team, at 1h40m is Noel Essers from Belgium and in third is his compatriot Igor Bouwens, who has a difference of 2h08m for the Portuguese. Outside the equation is Czech Tomas Tomecek who suffered in the fifth stage a penalty of more than 10 hours.

After the rest day, tomorrow will be held the sixth stage of the Africa Race between Dakhla and Chami. The day starts very early because it will be necessary to fulfill the customs formalities to cross the border to Mauritania during the morning. The special will count with 176 timed kilometers and the arrival at the camp in the middle of the afternoon will allow the assistance teams to check the vehicles before the marathon journey.