A first WTCR race win as a Hyundai driver for Mikel Azcona in Pau and an excellent weekend for the Hyundai Motorsport team at the Nürburgring proved the performance of our TCR cars in the most testing and competitive arenas. In national competitions there were podiums for Hyundai runners in Italy and the USA, as well as in TCR Europe and TCR South America. Meanwhile, new customers showed great pace in their first events with newly delivered i20 N Rally2, while two Customer Racing Junior Drivers took second place finishes in their latest national championship rounds. 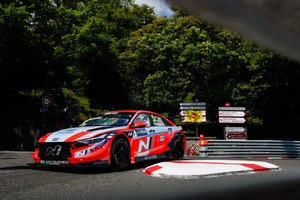 Azcona wins in Pau
Mikel Azcona became a race winner on his first competitive weekend as a Hyundai Motorsport Customer Racing driver, taking the chequered flag in Race 2 of the FIA WTCR season-opening Race of France weekend at Pau (May 7-8) in his Elantra N TCR. Azcona picked up the lead at the start after a clash between the leaders put his BRC Hyundai N Squadra Corse team-mate – and pole-sitter – Norbert Michelisz out of the race.

Once the race restarted following a Safety Car period Azcona was able to pull out a gap over the chasing pack – managing his advantage through the second half of the race to resist pressure from behind and keep the lead on the tight street circuit.

He added the points for victory to those won in sixth position of the weekend’s first contest, where Michelisz was able to finish ninth after starting tenth. His total puts Azcona third in the standings after the opening races of the year.