It was a strange New Year’s Day: while the rest of world celebrated the arrival of 2021 year, in Jeddah’s King Abdullah Sports City, preparation work for the latest edition of the Rally Dakar was in full swing. Monster Energy Honda Team was given the green light after passing all the scrutineering checks carried out prior to the curtain-raising prologue which takes place tomorrow, Saturday. 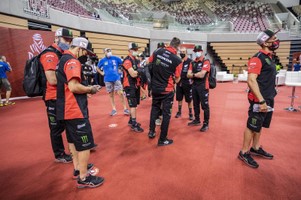 The team was able to overcome all the tests – some more complicated than others – and Monster Energy Honda Team is now ready to get the 2021 Dakar Rally underway. Getting to Jeddah itself – the starting point of the race – was no easy feat. However, all team members – riders included – managed to arrive in time to spend two days quarantined in a city hotel. Subsequently, squad members were subjected to a final PCR test before any further action – such as picking up the vehicles from the port – was allowed.

The results, when they finally arrived, all proved negative, setting the machinery in motion for the great challenge. Yesterday, the riders underwent the preparatory ‘shakedown’ while today, the bikes, riders and other team members, were subjected to the administrative and technical checks, eventually getting the go-ahead for Monster Energy Honda Team to officially enter the race. 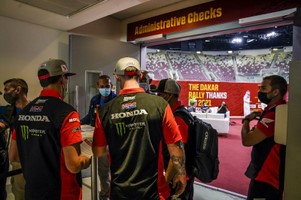 Tomorrow, sees a short ten-kilometre prologue which will not only be a points-paying qualifier, but will also dictate the starting order for the first full stage on the following day. The time established by each participant will be multiplied by four to establish the opening gaps between riders. On Sunday the first stage gets underway from Jeddah heading to Bisha, including some 277 kilometres of special timed stage out of a total of 345 kilometres, including liaison sections.

Ricky Brabec #1 :« We’ve finished the scrutineering and we are now looking forward to the prologue tomorrow. The whole team is ready. I’m ready as well. We will try and do our best to defend the number one. It’s not going to be easy. The target on our back is pretty big. But we are here and we can’t really say much right now. The race hasn’t even started. We’ll get back to you guys in a couple of days and let you know how things are going. That’s the goal – to defend the number one. » 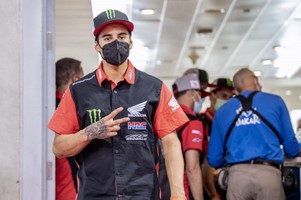 José Ignacio Cornejo #4 : « I’m happy to be here to start another Dakar Rally, my sixth and fourth with HRC. I’m pleased, the team is solid and highly-motivated, eager to get out and have a good race. Tomorrow, we have the prologue and it will be important to make a solid start, with good pace and without making mistakes. It will be a good chance to get a feel for things ahead of stage one on Sunday. We will give it everything we can, as always. »

Kevin Benavides #47 : « Everything is ready. The wait is over and I am very motivated to start this new Dakar Rally. I have trained a lot and I was able to win in the only race – the Andalucia Rally – that I competed in, which has made me far more motivated to arrive here in good shape. I am eager to start this Dakar, so let’s get the action underway! » 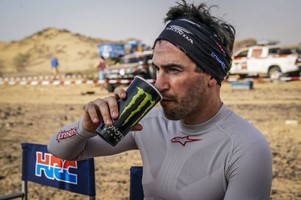 Joan Barreda #88 : « Today we did the administrative and technical verifications and the truth is that everything went quite quickly because we had practically everything ready to go. Normally everything is slower and more laborious. Now we only need to start tomorrow at noon with the prologue where we can give it some throttle, which is what we all want. »

Ruben Faria – General Manager : « The bikes have been checked, the documents, too. Everything is done and we are ready to start the prologue tomorrow that will determine the starting order on the first day. It won’t be a very long special, but there will be some navigation and we hope it won’t be too complicated. It will be difficult for the riders as starting the Dakar is always an emotion-filled event. The idea is that they can do the best possible prologue. The goal is to reach January 15 on top sport and with all the bikes in the top ten, with some good feelings. There are many very good riders. Ours guys are good too and they are also in great shape. I’m confident the team to be able to produce a good result. »