The MINI ALL4 Racing is the most successful rally car in the X-raid family. This day ten years ago on the 6th December 2010, X-raid introduced the four-wheel drive desert racer. In doing so, the team embarked on a remarkable success story: the MINI ALL4 Racing was to present the team with four Dakar victories, five FIA World Cup titles, and countless other successes.

The start of the ‘MINI ALL4 Racing’ project itself was extraordinary: the decision for the new member of the X-raid family to succeed the X-raid BMW X3 CC was only taken in 2010. The team worked hand in hand with its partners and suppliers, in order to have the car ready in time for the Dakar. « Without Magna Steyr, MINI Design, Heggemann Autosport and Faster, it would not have been possible to implement this project so quickly, » recalls Sven Quandt. 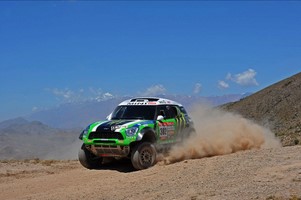 Despite the lack of time, there was no shortage of developments. The biggest innovation was definitely the removable outer skin, which was attached to the vehicle using quick-release fasteners. This gave the mechanics quicker and easier access to the inner workings of the car. Subsequent X-raid vehicles were assembled using the same principle. However, as well as making the car easier to service, it was also possible to optimise aerodynamics and weight distribution.

Eight employees at the company headquarters in Trebur began assembling the MINI on 19th November 2010. Just one month later, Guerlain Chicherit and Michel Périn completed the first rollout. After a short test in Le Creusot, France, the MINI ALL4 Racing was shipped to South America for its first Dakar. « Back then, we were very relieved, as no problems arose, » says Quandt. « However, the temperatures were low in France – we still had to wait and see how the heat would affect the car in South America. » 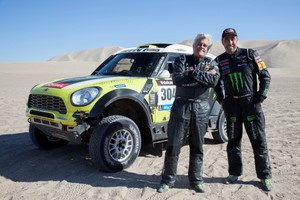 In Argentina, all eyes were on the MINI ALL4 Racing. « The MINI triggered totally different emotions among the spectators, » reports Thomas Quandt, who supervised the marketing and media side of the project for X-raid. « Right from the word go, we wanted to preserve the charm of the MINI, whilst at the same time making it suitable for off-road racing. » Unfortunately, the race came to a premature end on the rest day: the MINI ALL4 Racing and Guerlain Chicherit suffered such severe damage in a crash during the rollout that the team was forced to retire. Despite this, the mechanics still rebuilt it over the following days, allowing the MINI to reach the finish in Buenos Aires under its own steam. 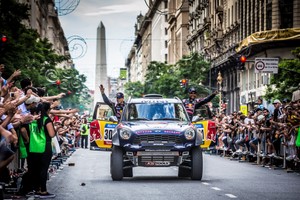 However, that was the last of the misfortune for the MINI ALL4 Racing! Just a few months later, Stéphane Peterhansel and Jean-Paul Cottret claimed the car’s maiden victory at the 2011 Abu Dhabi Desert Challenge. They went on even better in January 2012, presenting the X-raid team with its first success at the Dakar. X-raid also impressed with the fact that all five MINI ALL4 Racings that started the rally finished in the top ten. For the next three years, there was no beating the MINI ALL4 Racing: Peterhansel and Cottret repeated their success in 2013, Nani Roma and Michel Périn triumphed in 2014, before Nasser Al-Attiyah and Mathieu Baumel took their place on the top step of the podium in 2015. In addition to the four Dakar victories, drivers at the wheel of the MINI ALL4 Racing also won five FIA World Cup titles. 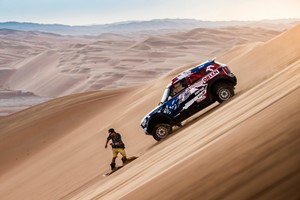 As well as the many rallies, the MINI ALL4 Racing has also embarked on many other adventures: Guerlain Chicherit drove it through Tignes, Nani Roma transported it to Jay Leno in the USA, it has been surfing through the Abu Dhabi desert with Kuba Przygonski and a sandboarder, and many more.

The X-raid family has now grown to include the MINI JCW Rally and the MINI JCW Buggy, but the MINI ALL4 Racing remains a popular customer car, with which drivers continue to achieve top results.