In a season of global FIA motor sport decimated by the Covid-19 situation, the Saudi Automobile and Motorcycle Federation (SAMF) managed to save the FIA Baja series by running two events that will decide the outcome of the five-round series.

Al-Attiyah will drive the sole Toyota Gazoo Racing entry over the course of the two events in the deserts of north-central Saudi Arabia and will be joined by Overdrive Racing entries for local star Yazeed Al-Rajhi, the Dutch duo of Bernhard Ten Brinke and Erik van Loon, Frenchman Ronan Chabot and a Team Orlen/Overdrive Toyota Hilux for Poland’s Jakub Przygonski. An official Toyota entry is yet to claim a win at the Ha’il event.

The Belgium-based operation has been making pre-event preparations before heading to the Kingdom to prepare for the two Bajas in Ha’il that precede the Dakar Rally at the start of January 2021.

While Al-Attiyah and French navigator Matthieu Baumel look to round off the chaotic season by challenging for outright victory in their Toyota Hilux, Ten Brinke will be looking to try and clinch a first ever FIA Baja title. Partnered by the Belgian Tom Colsoul, Ten Brinke will arrive in Saudi Arabia locked in a duel for the title with Russian Vladimir Vasilyev after the Dutchman’s impressive win in Baja Portalegre last month. The pressure will be on Ten Brinke to balance speed with a degree of caution in a bid to clinch the prestigious Drivers’ title.

« Our last test for the Dakar will be by doing Ha’il Baja, » said Baumel, who won events in Qatar and Andalucia this season with Al-Attiyah. « It’s good news that all the teams can compete in this race, just around 15 days before the start of Dakar. This is unusual because we are not normally allowed to test in the country of the rally and especially 15 days before. This will be good for us to drive a little bit on the sand, as we did not really compete this year due to the Covid.
« It will be good to be there for five days competing in this rally. It will be the last check for everything on our new Toyota. We are quite happy with Nasser to be there. It will also be good to work a little bit with all the navigation. It will be a good training for Dakar. » 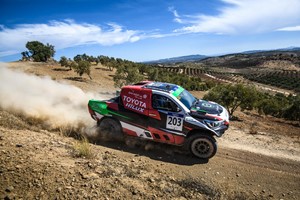 Al-Rajhi and German co-driver Dirk von Zitzewitz will be looking for outright victory on the driver’s home event. The Saudi pushed Al-Attiyah and Carlos Sainz hard at the Andalucia Rally in southern Spain in October and has a formidable record in the Ha’il International Rally – an event that kick-started FIA international motor sport of all forms in Saudi Arabia back in 2007.

Przygonski and Germany’s Gottschalk clinched the 2020 Polish (RMPST) Cross-Country Championships at Wysoka Grzęda Baja Drawsko and arrive in Saudi Arabia keen to continue their Dakar preparations in the Team Orlen-supported car. The Pole won the FIA World Cup for Cross-Country Rallies two years ago and is sure to be challenging an impressive FIA field over the course of the two events, spanning six competition days.

Dutchman Erik Van Loon and French co-driver Sébastien Delaunay crew the fourth of the Overdrive cars, the experienced duo hoping to strengthen their relatively new partnership before tackling the Dakar together for the first time. The pair worked together in Andalucia and set some impressive times, despite a technical issue preventing them taking a potential top five finish. 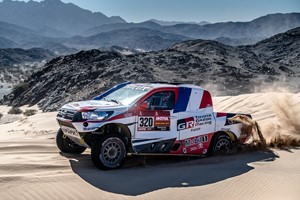 The French crew of Ronan Chabot and Gilles Pillot complete the official Toyota line-up in Saudi Arabia, the experienced duo hoping for a clean run as they make their final preparations for another Dakar outing with Overdrive Racing.

The closing two rounds of the FIA World Cup for Cross-Country Bajas take place over a hectic seven-day period. The three-day Baja Hail 1 (December 10-12) will offer 592 competitive kilometres in a route of 890km.

Baja Hail 2 (December 14-16) has a slightly shorter format and offers 479 kilometres of competition in a route of 780km. Most equipment will likely then stay in the Middle East over the Christmas period before teams ready themselves for the Dakar Rally at the start of January. 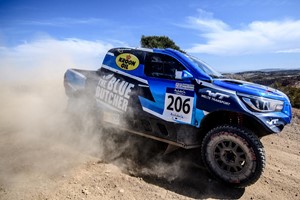