After 6 days and 1500 kms of riding, Joaquim Rodrigues of Hero MotoSports Team Rally was crowned the winner of the Pan Africa Rally 2019. A fantastic and consistent effort over the last week, saw him cross the finish line of the final stage in Merzouga today.

For Joaquim Rodrigues, the second international win of his career, will be a special and particularly satisfying performance, as he made a painful and rather long recovery from his crash in the Dakar 2018. He now has 2 wins to his name with BAJA India earlier in 2017, being the other one. He has had a pretty solid season so far and this win will go a long way in getting back to his top performance levels in the next two big rallies, of the season, including the Dakar. 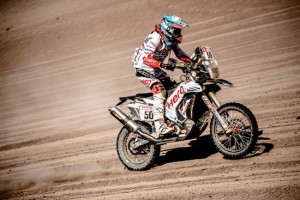 C S Santosh too, will treasure this performance as he crossed the finish line today to post the best ever finish by any Indian in an international rally, a result that will make him and the entire nation proud. His 5th place finish here, was an outcome of some really gritty and consistent performances across the stages in the Pan Africa Rally 2019, and will give a real boost to his confidence and preparations for the Rally Du Maroc and ultimately the Dakar 2020.

For Hero MotoSports Team Rally, this is the first win of this season and 2nd overall in their international rally career, BAJA India 2017, being the other win. This season in particular, has been a revelation for the team as they have clearly stepped up their game to target podium finishes. The team can now boast of 2 podium wins already in this season coming from the Merouga Rally and Desert Storm, a dominating performance with many stage podiums in the Silkway Rally and now this win to top it off. 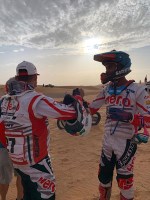 With this strong momentum behind them, the next stop for Hero MotoSports Team Rally will be the Rally Du Maroc in Oct, which is considered to be the last training ground before the Dakar Rally, and witnesses the participation from all the Factory teams. With a full strength 4 rider team, Hero MotoSports Team Rally will be looking to intensify the already high level of competition expected in the Rally Du Maroc, with Dakar 2020 in their sight.

Wolfgang Fischer, Team Manager and Head, Hero MotoSports Team Rally said, « A fantastic week of racing came to a highly deserved end today for JRod and Santosh. My big compliments to the entire team for putting up a great performance and thanks to our fans and everyone back at Hero. JRod’s journey has been nothing short of an inspiration for everyone. From his dream debut at the Dakar to winning the first ever rally for Hero at BAJA India in 2017, to his severe injury in Dakar 2018, to making an impressive come back and now winning this today, is something special. Santosh has been an inspiration and Global Ambassador for the Indian MotoSports fraternity for so long and posting his best ever show today, will do a lot of good to the sport in India. Looking forward to the next race in Rallu Du Maroc in 8 days, where for the first time, Hero team will start in the full strength 4 rider configuration. » 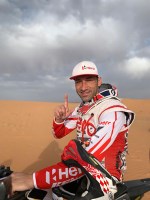 Joaquim Rodrigues, Rider, Hero MotoSports Team Rally said, « I am really happy with this win at the Pan Africa Rally. The last couple of years have been difficult for me after my crash at the Dakar in 2017.My road to recovery has been long and painful and I am happy to be finally getting back to my 100%. My confidence is back and my back is really good now. Congratulations to Santosh also for doing a great job and posting his personal best. My thanks to the entire team for supporting me and giving the best possible support so this win is for Hero and Hero MotoSports Team Rally. »

C S Santosh, Rider, Hero MotoSports Team Rally said, « It’s been a really good race for me. I was consistent and getting better with every stage. You always push yourself to do better than before, race your own limits and finishing 5th here today is very satisfying. I am quite happy with the way this season has progressed and with my training, so all we have to do now is to build on it to the Dakar. Big congratulations to my buddy JRod for a fantastic win and a big thanks to the awesome team here and at Hero back home and our fans. »