Sacha Fenestraz put in a strong performance at the penultimate round of the 2019 Super GT season at Sportsland SUGO after finishing in the top five.

Sacha and his Kondo Racing team-mate Kazuki Hiramine finished the race in fifth place, with the wet weather conditions on Sunday proving to be a challenge for all drivers.

After a difficult practice session for the team, Kondo Racing put trust in Sacha to get the #56 Nissan into the second round of qualifying. Sacha put in a great lap to go fourth fastest and Hiramine continued Sacha’s hard work to secure a fourth-place start in GT300 category for Sunday’s race.

As his team-mate was getting ready to start the race rain started to fall at SUGO. There was not much time to make his decision, but as Sacha explains, he was able to use his previous experience in similar conditions at the circuit to help his team make a quick decision. 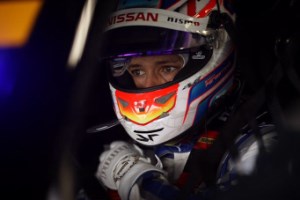 « About 10 or 15 minutes before the race started, it started to rain a little bit. My team weren’t sure what to do with the tyres, but I knew from my experience in F3 that this track has little grip as soon as it starts to rain, so I pushed for us to put on the wet tyres. »

The team was only one of a couple that decided to start on the wet tyres along with the #55 Honda in second. As soon as the race started the decision paid off straight away, Hiramine quickly moved up into second place behind the other wet tyre runner.

Unfortunately for Hiramine he started to drop down the order, and when they pitted for Sacha to take control of the Nissan they were even further down the field. A well-timed safety car meant that Sacha was quickly able to move back up to fourth after everyone had made their stops. The weather conditions were becoming worse, but Sacha stayed calm and didn’t make any mistakes to hold the place for the majority of the race.

With the Bridgestone tyres performing better in these conditions Sacha had a battle on his hands to keep fourth. Going into the final parts of the race he dropped to fifth but after a dicey battle Sacha regained the position on the penultimate lap. However on the final lap he lost the place again and had to settle for fifth at the chequered flag. 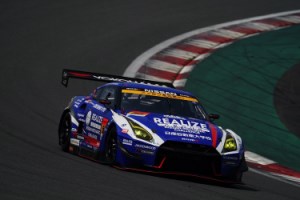 « I wasn’t able to keep the car behind me on the final lap. The Bridgestone tyres they used were very strong in the wet, and they were able to get the power down on corner exit to overtake very easily.
« It wasn’t an easy one to swallow, but I did my best and overall I am very happy with my performance. It was my first full stint in the wet conditions in this car, and I think I did a good job to keep up with the lap-times set on Bridgestone tyres. »

Sacha, Hiramine and Kondo Racing leave SUGO fourth in the GT300 standings, with the final race of the 2019 Super GT season set to take place on November 3 at Twin Ring Motegi.

Before then however, Sacha will be looking to finish his championship-winning Japanese F3 season in style next weekend at Okayama.