edged into a slender advantage of 3.6 seconds after a narrow and dusty opening super special stage of the Jordan Baja on the outskirts of Aqaba on Thursday afternoon.

Competitors from 17 nations lined up at the start of the opening competitive section and Przygonski clocked a time of 2min 50.6sec in his Mini All4 Racing. Orlando Terranova was still suffering the effects of jetlag after a long journey from Mendoza, but the Argentine still managed to beat fourth-placed title rival Vladimir Vasilyev by 4.7 seconds and held second place, with Saudi Arabia’s Yasir Seaidan in third in the last of the quartet of Minis.

In a change to the more traditional opening day timetable for Baja-type events, the ceremonial start for the seventh round of the FIA World Cup for Cross-Country Bajas adjacent to the shores of the Red Sea followed the three-kilometre stage in downtown Aqaba.

Russia’s Fedor Vorobyev and Italy’s Michele Cinotto are locked in a two-way tussle for T3 Trophy honours this season. Cinotto drew first blood with a time 3.6 seconds faster than his rival on the super special and held sixth overall in his Polaris. 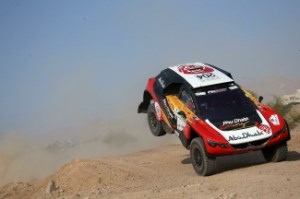 Romania’s Claudiu Barbu overcame logistical hurdles before the start to continue his challenge for honours in the FIA T2 category for series production cross-country vehicles. The Nissan Navara will lock horns with Saudi Arabia’s Muneef Al-Salmani for showroom honours this weekend.

Balazs Szalay and László Bunkoczi are tackling the event in an Opel Grandland X that was built by Szalay’s Opel Dakar Team in his native Hungary. The crew finished the super special in 10th place after spending Wednesday with various international media on a trip to Petra and Wadi Rum.

In addition to working in the classic car business with Mercedes and Porsche brands, the company was integral in the design and production of Dakar-inspired Mars Rovers for the Hollywood movie The Martian. Several of Szalay’s mechanics worked on location in Wadi Rum during the shooting of the film and one of the Mars Rovers is on display at the Royal Automobile Museum in Amman.

The Jordan National Baja ran at the rear of the field and Palestine’s Mahmoud Al-Maabda clocked the fastest time on the super special to hold a 3.1-second lead over Jordan’s Hamzeh Tymour at the night halt.

Ata Al-Hmoud is the defending champion in the motorcycle category, but the Jordanian will have his work cut out to retain the title. He began his defence with a fourth-placed time of 3min 39.8sec on a stage where the early unofficial advantage on two-wheels went to fellow Jordanian Abdullah Boshmaf before results were verified and potential penalties were applied.

Abdullah Al-Aishah was an unofficial second and Emirati rider Sultan Al-Balooshi came in third of the eight riders on his Kawasaki KX 450F. 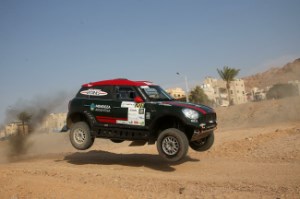 Friday
Cars open a new chapter in Jordan Motorsport history with the first of two daunting selective sections through Wadi Rum from 08.42hrs. Crews will tackle the challenging and varied Salhiyah 211km section through sandy and rocky terrain before a remote service at Disi. After a regroup, action continues with the second 79.77km Disi selective, with the first car due at 14.32hrs.

The first of the motorcycles will start Salhiyah at 07.48hrs and Disi from 13.38hrs, but cars entered in the Jordan National Baja will follow their FIA counterparts before a night halt in Aqaba. 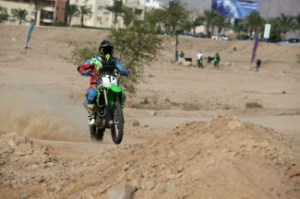