Qatar’s Adel Abdulla, French off-road racer Matthieu Serradori and team-mates Benjamin and Cédric Bujon overcame an awful start to climb back from the foot of the massive field to finish a superb 12th overall and third in their category at the 27th edition of the 24H Tout Terrain de France, presented by Sofrat, at the Circuit de Fontaine-Fourches on Sunday.

After a disappointing qualifying session and losing many laps following an early accident, the MMP (Micouleu Mécanique Précision) Rallye Raid Team-built Buggy managed to complete 180 laps of the demanding northern French circuit and finished 34 tours behind the overall winning Can-Am Maverick of the French trio of Sébastien Guyette, Pascal Mercier and Maxime Fourmaux. 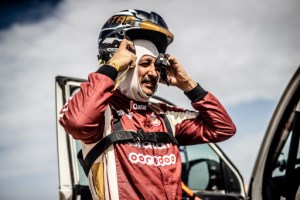 Adel said: « It was a very enjoyable and one of the most difficult races that I did in my life. It was not easy. To make the strategy beforehand with the team, you could really feel the teamwork in this race, especially with everyone pushing for a good result.
« The problem was we had a small issue in the qualifying (Saturday morning) because the car developed a misfire. We lost our good position for the start. Then, after the first five laps, our first driver nearly made a big accident on the front of the car and we were towed back to the paddock at the circuit. The team started to repair the car and we slipped back to position 72 from 75 or 76 cars.
« Then, we all tried to push and push and we gained some positions after we fixed the car. We reached 63 and then 50 something and then I went in after midnight and we were 46th. I drove for 2hrs 15min and we moved up to 34th. We were pushing all the time. »

As morning broke on Sunday, Adel and his French team still faced a daunting fight back through the field. They were classified in 24th position in the overall standings after 17 hours of racing. The MMP Rallye Raid entry had amassed 112 laps and were running 35 tours behind the leaders, having run a best lap of 5min 55.655sec. 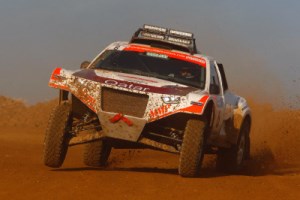 At this point, the overall leaders were Guyette, Mercier and Fourmaux in a Can-Am Maverick entered in the SSV category. The leaders in the T1A category were the third-placed Mitsubishi Pajero crew of Igora and Rudolfo Skoks and Arvis Pikis and they held on to secure the class win at the finish.

Later in the morning, Adel returned to the driving seat. « It was my turn again and I pushed to take us to position 14 and our last driver moved us up even further to 12th overall and third in the category.
« Our two cars finished second and third in the category, It was a fantastic result. It was the first time for me to have this kind of experience. I am thinking seriously to do something next year with this championship, because it is very good. You need to be patient. The circuit is over 7km long. Sometimes they put the water on the roads to stop the dust and it can be unbelievable difficult to drive. It is like driving on ice or snow – very slippery and tricky.
« I thank my sponsor Ooredoo, all the people who support me and MMP for the really good and enjoyable experience. »