A result to be proud of and the organizers of the Transanatolia Rally 2019 know well: bring to the finish line 99 percent of the competitors is important and if we think at the difficulties of this rally, the satisfaction is completed.

Mert Becce and Sertaç Tatar on a Suzuki New Grand Vitara won the cars category, with a little Suzuki that really impressed everyone for its performance. Becce started quiet enough, suffering in the first special stages the strenght of two big cars – but certainly no more powerful – the Mitsubishi Pajero of Benan Engin and Uğur Tepe and the L200 of Batuhan Korkut and Ilayda Hanci Korkut, and it was mainly with the last one that he fighted harder. The Pajero of Benan Engin in fact, at the end of the 9. stage has been practically excluded from the battle for the podium because of a delay at the end of the stage and, then, also for a penalty inflicted after some navigation mistakes. Exactly, the navigation.. that was undoubtedly this year, more than all previous, the salient feature of this rally that measured just over 2100 kilometers of which over half of special stages. 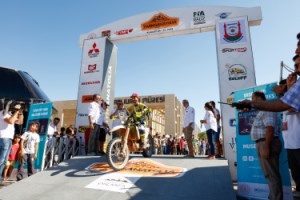 Becce won only four special stages on a total of 17 and at the end of the race he had a gap on the second one, Batuhan Korkut, of just under 20 minutes: throughout the rally the gap between the first three, sometimes four cars, was always contained in twenty minutes but it was in the special stage number 13 that the Grand Vitara driver launched his attack winning at the end of the SS and inflicting an incredible gap to the opponents. Since then, the Land Rover of Tank Gokbay and Osman Metin entered in the podium fight, as well as the Toyota Prado of Burak Ahmet Çepni and Hüseyin afsar, and it has been the last special stage, Saturday morning, to give the third step of the podium to Burak Ahmet Çepni just for 35 ».

The decision of the Transanatolia Sport Organization this year to create a special category for the SSV at the end was good for the cars competitors: Tsanko Tsankov and Zornitsa Todorova (Can Am) in fact, won the category with a total time of 20h19’48 » against the 21h.39’30 of the Grand Vitara proving, if by chance it was still necessary doing, that the SidebySide are really faster and better performing than most race cars.

In the second place of the SSV category the French crew of Yves Tartarin and Cedric Duplé (Steenbok) who back to home with a good result in a race that, for them, was really important to test a car practically new, that will go in December to Dakar 2020 in Saudi Arabia. The third place in the SSV was Çağdaş Çaglar and Ertuğrul Danisment on Can Am Bombardier. 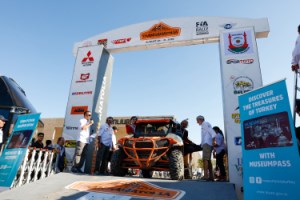 For the first time this year at the Transanatolia Rally there were three trucks at the start and the battle was, from the beginning, very tight because the trucks, three Mercedes Unimog, were identical. Unfortunately in the first SS of the second stage stopped one of the leading actor, Marino Mutti who broke a traction support staying with traction only on three wheels instead of four, which presented many difficulties on the many climbs in the mountains. At that point the struggle for the highest step of the podium was restricted to Giulio Verzeletti and the Cabini family -on one of the Unimog there were Dad Antonio and his son and his daughter, Carlo Augusto and Raffaella. And it is precisely the family who won in a challenge that also played on the penalties since both crews had three special tests unfinished on their shoulders. Speed and navigation mistakes decided the victory and Cabini at the finish line had a gap of over 1h40′ on Verzeletti.