« Every day the level is higher ». Maurizio Gerini (Husqvarna), winner of the stage today for the motorbike category starts his interview in Goreme with these words.

« These places are incredibles and I’m very happy to be here, in Cappadocia, because last year we just pass here without stopped ». The three special stages of this shortest day – 248 kms – really was not so easy.

« Today it has been a tough stage with a lot of navigation – said Gerini – and the special stages, day by day, becames more difficult. But I’m satisfed of my job today because at the end of this third stage I’ve increased my gap on my closest rival, Marco Borsi ». The italian rider, Marco Borsi, this morning start very very fast trying to win the stage and he managed to beat all the other riders…but not Gerini : now he occupies the second position in the overall but Gerini increased his gap and the difference between the two this evening is of 33’39 ». Borsi, as we said, is second followed by Nicola Quinto, Richard Kaye and Francesco Tarricone. Good day this third of Transanatolia Rally for the Turkish rider, İzzet Kazdal (Ktm) who exceeds in the overall standing Ejder Eristi (Ktm) now eight behind Kazdal, seventh.

In the quad category the challenge between Korkut Çaçar and Israfil Akyuz becames day by day more interesting: the two riders on Can Am Renegade at the end of the third day of the race occupy respectively the first and second position with only 33 » of difference.

The battle between the two SidebySide at the top of the overall standing it’s really hot and today Tsanko Tsankov and Zornitsa Todorova (Can Am) won the first and second special by only giving the first place in the third SS to Yves Tartarin and Cedric Duple (Steenbok): both crews had problems in this third stage, a mechanical rupture for the Bulgarians and a puncture for the French who in the absolute classification remain second with 31’28 of gap. 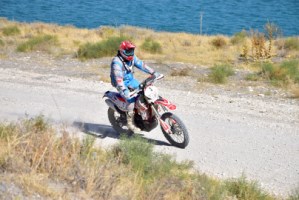 Twist and turns in the car category today: the Suzuki Vitara of Mert Becce and Sertaç Tatar close the day with the first position in the overall standing. They won the first two special stages and now they are the leader with 3’51 on the Mitsubishi L200 of Batuhan Korkut and Ilayda Hanci Korkut, winner of the third SS. Third position in the overall for the Mitsubishi Pajero of Benan Engin and Uğur Tepe at 8’03 » da Korkut. The first five cars are contained in the space of 22
minutes and everything, therefore, can still happen in the next four days.

In the trucks category Giulio Verzeletti (Mercedes Unimog) won the first two stages leaving the third one to Antonio Cabini and it’s Verzeletti in this moment leader in the overall with 17′ on Cabini. Unfortunately Marino Mutti failed to dispute all the special stages today for the break of the axle yesterday on his Unimog Mercedes.

Tomorrow fourth stage from Goreme to Kahramanmaras: 372 kms in total and again 3 special stages. The first one of 59 kms, the second one of 54 and the last of about 107 kms. The finish line will be in the bivouac of Se Yaylasi. About this stage Orhan Çelen, one of the organizer of the rally, tell: « the first one is drawing inside an old dried out lake: pretty fast, requires careful navigation, nevertheless gives so much fun. By the 2nd and the 3rd stages, riders and drivers will
again climb the mountains and following the various forest roads. »