Navigation and complicity, sometimes, friendship. These are the key words of this second stage of Transanatolia Rally 2019. If we exclude the leader of the motorbike rankings, Maurizio Gerini (Husqvarna) all the others riders, today, have raced together, sometimes forming pairs, sometimes groups of three or even four or five persons.

This fact because today it was imperative not to get lost and who tried to race alone in the first special stage of 168 kms has changed his mind and very often he has followed another rider.

Behind Gerini, for example, there was one group of 3 riders: Livio Metelli (Husqvarna), Nicola Quinto (Beta) and Marco Borsi (Husqvarna). They joined forces and met each other about 50 kilometers after the start of the first SS and have taken the decision to continue just to the refuel and then until the end, together. Marco Borsi won the special stage but he was the boss of this trio because Quinto suffered from a problem at his electronic road book and Metelli after refueling had the same problem at his road book and both were forced to follow Borsi to reach the finish line. Few kilometers from the finish line of the first special stage Maurizio Gerini, leading until that moment, made a navigation mistake and when he come back on the right way the trio, coming at that moment on the pist, had only to follow him. So the positions mixed and Marco Borsi won in front of Nicola Quinto, Livio Metelli and Maurizio Gerini. 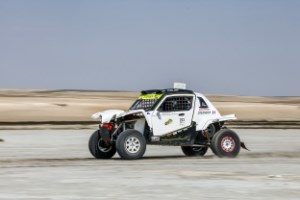 Gerini in the second special stage started very fast and won preserving the first position in the overall standing of motorbike category with a total time of 7h15’47: behind him with 24’07 of difference, Nicola Quinto and Marco Borsi, third, at 26’06 ». Fourth position for the English, Richard Kaye (Ktm) and behind him we have two Italians, Livio Metelli and Francesco Tarricone.

Seventh position for Ejder Eristi su Ktm while the Ladies in the race stand in 19. position, Francesca Gasperi, and 25. Serena Borsi, both on Husqvarna.

The first two SidebySide in the standings changes their position during the first special stage this morning but the Bulgarian crew of Tsanko Tsankov and Zornitsa Todorova (Can Am) at the end of the day won both the SS – the second one just for 3 seconds – on Yves Tartarin and Cedric Duple (Steenbok): in the overall standings between the two now there is just under half an hour.

In the car category today there was a change in the overall standing between the Mitsubishi Pajero of Benan Engin and Uğur Tepe who taking the lead for less than 4′ on the Mitsubishi L200 of Batuhan Korkut and Ilayda Hanci Korkut, yesterday first, while the Suzuki Grand Vitara of Mert Becce and Sertaç Tatar go up in the standing of one position thanks to the two thirds places in today’s special stages and now it is third. 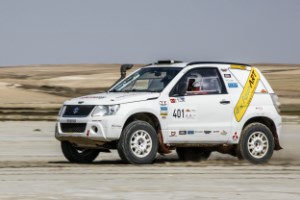 Very unlucky Marino Mutti who is still in the special stage, with his codriver Andrea Mazzoleni for a problem to a wheel of his Mercedes Unimog: Giulio Verzeletti (Unimog) take the leadership now and in the second place there is his team-mate, on Unimog too, Antonio Cabini.

Tomorrow third stage with a total of 248,62 kms – the shorter of the rally 2019 – and the caravan of the race will enter in Cappadocia, historic region of Central Anatolia. The start of the first special stage will be directly from the bivouac – 73 kms – and then it’ll be other two SS, one of 66 and another of 15 kms. The finish line will be in the fantastic town of Goreme, Unesco World Heritage from 1985.