Honda Civic Type R TCR driver Nestor Girolami blasted into the lead of the WTCR – FIA World Touring Car Cup with a sensational wet-weather victory – his second of the weekend – at the Hungaroring on Sunday.

The Argentinian, who was taking part in only his second WTCR event, started his ALL-INKL.COM Münnich Motorsport car sixth on Race Two’s partially-reversed grid, but made an incredible start to move up to second within three corners.

After snatching the lead before the end of the first lap, he was able to control the pace to claim the top spot.

He added sixth place in the final race of the day to end the weekend with a 10-point lead over team-mate Esteban Guerrieri at the head of the Drivers’ points table, while Münnich Motorsport are 58 points clear in the Teams’ title race.

Team-mate Esteban Guerrieri was an excellent second-fastest in the morning qualifying session, placing him ninth on the Race Two grid, but the Marrakech race winner survived a bruising encounter to finish fifth.

He led the opening stages of Race Three, but dropped to third after suffering an electrical issue at one-third distance that caused his engine to bog down momentarily.

A broken steering arm – a likely legacy of damage sustained during Race Two – caused his retirement with a handful of laps remaining. 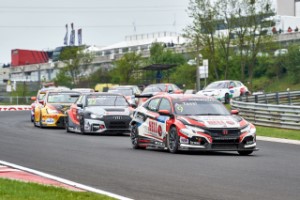 KCMG’s Attila Tassi played a starring role in the wet Race Two at his home circuit. Starting 17th, he charged through the field to finish a career-best eighth.

His 15th-place finish in Race Three ensured he scored points in each of the weekend’s three events for the first time in his short WTCR career.

Team-mate Tiago Monteiro qualified 21st and was on the receiving end of a major hit on the first lap of Race Two, which damaged his car and put him out.

From the same position on the dry Race Three grid, he progressed to 17th by the chequered flag.

Tiago and Attila are 16th and 18th in the Drivers’ Championship with KCMG ninth in the Teams’ points.

The next round of the WTCR takes place at the Slovakiaring near Bratislava on May 10-12. 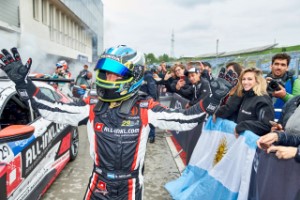 Nestor Girolami #29 – ALL-INKL.COM Münnich Motorsport : « It was a fantastic weekend; couldn’t have been much better. A win and the championship lead; just amazing. For the second race I started sixth and couldn’t imagine I would be in the lead by the end of the first lap. I’m sorry for Esteban because he deserved to win the last race, but that’s motorsport. Thank you to the team, who did a fantastic job, and to Honda Racing for a fantastic car. »

Esteban Guerrieri #86 – ALL-INKL.COM Münnich Motorsport : « We’re leading the Teams’ Championship and I’m second in the Drivers’ points with Bebu leading, so it’s been another very good for us overall. Personally, we did a good job in a very tight qualifying session to start second and in Race Two in the wet, I probably had the most intense experience I’ve had in a racing car. I didn’t want to break my car so I tried to be cautious, but I still got hit so many times on the side and the rear, so I was very lucky to finish, but I was worried about the damage to my car, and it’s probably this that caused my steering to break in Race Three, which is a shame, because I’d made a great start and was leading before the little glitch. » 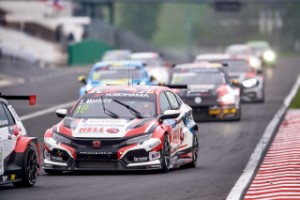 Attila Tassi #19 – KCMG : « I’m very happy with the results of today and the whole weekend. Seventeenth was not as good as I’d hoped for in qualifying, but it was still my best in the WTCR, but to come up to eighth in Race Two today was really fantastic. Racing in the half-wet conditions was very good for me because I have raced here so much, I know how to maximise the grip in those conditions. Then two more points in the dry last race finished off a good day. »

Tiago Monteiro #18 – KCMG : « A tough day to end a tough weekend. We didn’t perform as we wanted to in qualifying, and this championship is so close between all the cars that if you’re not perfect, you’re outside the top 15. Once you’re down in the pack, its always going to be tough to make progress, but in the wet race today I was pretty appalled by the driving standards; there’s just no respect down there. Our task is now to get ourselves qualifying near the front so we can have a better quality of racing. »