In spite it being Sunday, there is no rest for the Dakar. Far from it: today witnessed the longest stage so far in the 2019 odyssey at 839 kilometres. The route took competitors from inland to the coast – from the cold and wet heights of Arequipa to warm and windy San Juan de Marcona.

Riders rode the first 177 km-liaison section late yesterday evening which took the entourage to the impressive Tanaka dunes on the coast. Today the riders battled out an opening 84km-special, which was followed by an 18km neutralization section before the stage’s main trek – a tough 232km special which returned the bikers back to the bivouac in San Juan de Marcona.

Kevin Benavides fought nail and tooth for the stage win and nearly pulled it off, coming home less than two minutes shy of stage winner Quintanilla. However, the Argentine Monster Energy Honda Team climbed the overall leader board from seventh to fourth place, eating one minute into the overall leader’s time. 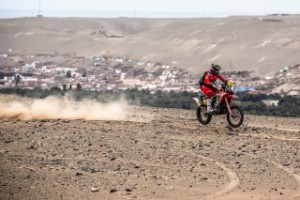 Nacho Cornejo, who moved up to second place after race authorities returned the time that he had spent assisting fallen rider Paulo Gonçalves in stage five, ended up opening the way for several kilometres. As a consequence of this disadvantageous position the Chilean dropped time but managed to keep pace with his adversaries.

Tomorrow, Monday, sees the first of the looping stages which this edition of the Dakar will feature. Riders can look forward to the highest proportion of kilometres of special stage out of the total of 387 to be completed. The hundred participants still surviving will face 323 kilometres of special. The stage will have some complicated navigation and will play out over broken ground, as the area has already seen the vehicles pass over it on previous days. 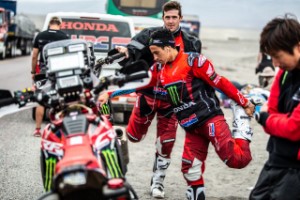 José Ignacio Cornejo #10 – STAGE: 10th   OVERALL: 12th
« Today was a good day. It was tough as there were a lot of stones and sand on the course. The first stretches had very soft dunes which were very difficult to pass. It turned out to be a good day for me. There was a section of special where I opened the track and I felt very comfortable and set a good pace. I am happy. We have four more days left and we will continue pushing. »

Ricky Brabec #15 – STAGE: 6th  OVERALL: 2nd
« It was another tough stage. The temperature was nice but the wind was a big factor. It’s kind of hard to ride all day with the wind pushing you around. At one point for about 50 km I was concerned about fuel. I know that we had filled up at the top at kilometre 80 at the neutralization. I was freaking out because I ran out of one of my tanks earlier than expected. On the whole it was a good day. There’s four days left. I’m glad to be at this bivouac full of fesh fesh that makes everything such a mess. I’m looking forward to the next four days. Hopefully I can stay in the fight and keep pushing. I feel great and my body is at 100%. » 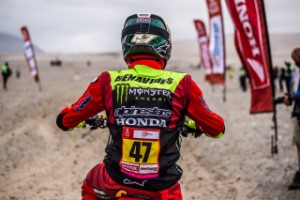 Kevin Benavides #47 – STAGE: 2nd   OVERALL: 4th
« Today was a good day. I changed the strategy to start pushing this second week and today I started further out. The idea was to finish as well as possible later on, so this second position on the stage is fine despite having lost a bit of time towards the end. We have to keep going and not waste too much time in the remaining stages. »

Raul Castells – Monster Energy Honda Team Manager
« Today was a very good day for Kevin. In the end he was second, but everything went very well. Ricky had a minor loss of time at a waypoint, but it was a short time. In general, we are very happy with the three riders: we have two who are fighting for victory and Nacho is helping a lot. We will continue fighting for victory until the end. The first five of the general are very tight and anything could happen. » 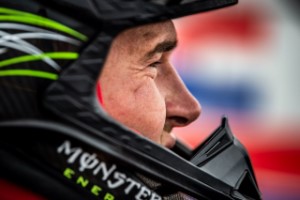 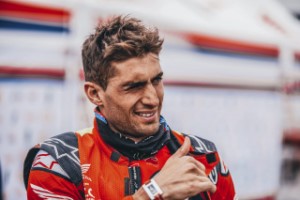