– Cars to start ahead of motorcycles tomorrow

They were followed home by Orlando Terranova and Bernardo Ronnie Graue (both ARG). Boris Garafulic (CHI) and Filipe Palmeiro (POR) are 16th after stage one.

The day started with the liaison stage to Pisco, where the crews were able to take a short break in the X-raid service park, before setting off on the 84-kilometre special stage around the bivouac. GPS problems in the motorcycle category meant that the cars were delayed by a little over one hour.

Reigning World Cup champions Przygonski and Colsoul were in good form and ended the opening day in third place. « It was only 80 kilometres, but they were pretty quick, » said the Pole. « As the sun was behind the clouds, you could hardly see whether the dunes were rising or falling. However, I am happy that we are up near the front and were able to keep pace with the ‘legends’. Having said that, the Dakar only really gets started tomorrow. » 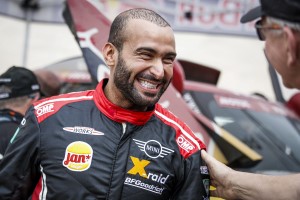 Al-Rajhi and Gottschalk finished two places behind Przygonski. « We did not take any risks today, » explained the Saudi. « Unfortunately, we spent a lot of time stuck in Harry Hunt’s dust. That happened to us again later, behind another car. I am happy with fifth place, and the gap to the leaders is not too big. »

Roma and Haro are also satisfied with their eleventh place. « The first day is always a bit weird, especially when there is a delay. You are sat in the car with your helmet on, but nothing happens, » said Roma. « Today, I found it hard to judge wither I was quick or slow. However, we were soon able to reel in Loeb – that surprised me a bit. Starting a bit further down the field tomorrow is not a bad thing. »

Terranova and Graue also came through the stage without any major problems and decided to start the Dakar without putting any pressure on themselves. « We took a steady approach, » said Terranova. « I round my rhythm on the final 30 kilometres. We will now make the final adjustments to the seat position. I am happy and looking forward to tomorrow. »

The start of tomorrow’s 342-kilometre special stage has a slightly different look to it: instead of the motorcycles, it will be the cars that open the route. This will make navigation significantly more difficult, as the co-drivers will not be able to follow the tracks left by the bikers.