– Peterhansel and Despres in seventh and tenth

The long wait finally came to an end today – the X-raid Mini JCW Team kicked off the 2019 Dakar with an 83-kilometre special stage around the bivouac in Pisco. Carlos Sainz and Lucas Cruz (both ESP) ended day one in second place in the MINI John Cooper Works Buggy, behind Al-Attiyah in his Toyota.

Stéphane Peterhansel and David Castera (both FRA) were seventh fastest, with Cyril Despres and Jean-Paul Cottret (both FRA) tenth.

As reigning Dakar champions, Sainz and Cruz had the honour of opening the first stage, the start of which was delayed by a little over an hour. The reason for the delay was GPS issues in the motorcycle category. The Spanish duo ended the opening stage in second place. « We did not have any major issues today, » reported Sainz at the finish. « We knew what to expect. Furthermore, we didn’t want to have to open tomorrow’s stage, so that is why we took it a little easier today. » 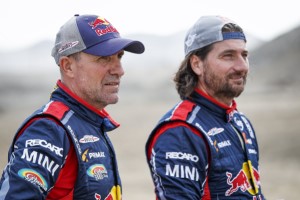 Peterhansel and Castera had to overcome a few difficulties, but still managed to finish seventh and secure their place in the top ten. « After so many weeks without a rally, I always take a bit of time to find my rhythm at first, » said Peterhansel. « As such, we did not push hard today. Plus, we had a slow puncture. We decided not to change the tyre, but to nurse the car home steadily. »

The third MINI JCW Buggy crew of Despres and Cottret ended day one in tenth place. « I love this rally and always feel particularly good on the opening day, » said a pleased Despres. « We did not have to push hard today and I really enjoyed the stage. »

The start of tomorrow’s 342-kilometre special stage has a slightly different look to it: instead of the motorcycles, it will be the cars that open the route. This will make navigation significantly more difficult, as the co-drivers will not be able to follow the tracks left by the bikers. 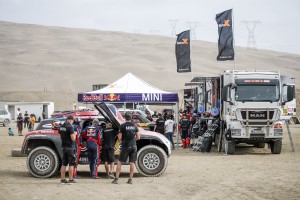