The high-speed action is now underway at the 2019 Dakar Rally. Following Sunday evening’s start podium in Lima, racing has commenced at the 41st edition of the world’s toughest race.

There was a party atmosphere in Magdalena del Mar as all 334 vehicles and 541 competitors that will race the Dakar were waved off by thousands of fans.

How many of those cars, trucks, bikes, quads and UTVs will cross the finish line back in Lima on January 17 remains to be seen. To do so they must complete 10 stages of desert racing, starting with today’s 331-kilometre route from Lima to Pisco.

Leaving Lima in style was nine-time WRC winner Sébastien Loeb (FRA), driving this Dakar as a privateer entrant. Once Loeb had taken his Peugeot 3008 DKR through technical scrutineering at Las Palmas Air Base he was challenged to a race – by an aeroplane pilot. Watch what happened next right here.

« First of all, I go to the Dakar to compete. To win… honestly, I find it difficult to predict a race like this. » – Sébastien Loeb

Loeb is now racing his fourth Dakar and competing for the win against former team-mates Stéphane Peterhansel (FRA), Carlos Sainz (ESP) and Cyril Despres (FRA) as well as former winners Nasser Al-Attiyah (QAT) and Giniel de Villiers (ZAF) among others. 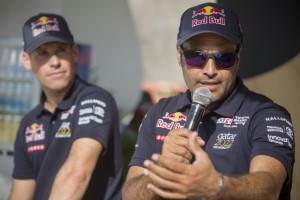 With the big city comforts of the Peruvian capital now left behind, the Dakar convoy will be sleeping in desert bivouacs until it returns to Lima on the final day of racing in two weeks. The stress and exhaustion of racing in the dunes all the day is bound to take an effect as we get deeper into the rally.

All competitors will be hoping to stay injury free, and in some cases avoid exacerbating bumps and bruises picked up earlier in the season. 2016 Dakar bike race winner Toby Price (AUS) starts the rally with a broken bone in his wrist healing as he rides.

« There’s a little bit of pain, for sure, the scaphoid’s not the best bone to be breaking, but I’m still comfortable. » – Toby Price

Price, the only Australian to win the Dakar, is part of the Red Bull KTM Factory Team which is looking to pick up its 18th consecutive bike race victory. Joining Price in the fight for desert glory are his KTM team-mates Sam Sunderland (GBR), Matthias Walkner (AUT), Laia Sanz (ESP) and Luciano Benavides (ARG).

Among those trying something for the first time at this Dakar – there are 135 rookies in total in 2019 – will be Ignacio Casale (CHI). Casale cannot be classed as a rookie, as well as racing in the bike and truck divisions he has won the quad race twice. But this year Casale enters his fourth Dakar category as he races a side-by-side UTV.

« This is the category of the future. My main goal is to enjoy myself and then we’ll see just how I can play a role in the general standings as the days go by. » – Ignacio Casale

Casale’s first Dakar attempt was in the truck category in 2010, a race that was won by Vladimir Chagin (RUS) behind the wheel of a Kamaz. Since retiring as a driver – after winning a total of seven Dakars – Chagin now serves as team manager for Kamaz. The Russian is predicting a tough race for his four man driver line-up of Eduard Nikolaev (RUS), Ayrat Mardeev (RUS), Dmitry Sotnikov (RUS) and Andrey Karginov (RUS).

« Competition in the truck category is very high. The fight goes in minutes, in seconds. Our truck must be powerful, fast, light and perfectly reliable. » – Vladimir Chagin

Monday’s Dakar stage between Lima and Pisco features 84 kilometres of timed racing. It’s the shortest stage of the entire rally, but will still offer us some clues as to who is in good shape for the intense challenges ahead. On Tuesday the distance and difficulty increases as stage two has the convoy racing for nearly 350 kilometres between Pisco and San Juan de Marcona.

Quotes
Sébastien Loeb: « We respect the desert, keeping in mind that the objective is to cross it and not get trapped. In sand dunes, you can win two minutes, but also easily lose nearly one hour, by doing small mistakes. So, we have to take our time. On the other hand, we have cars that don’t specifically allow us to slow down in dunes, because we get sucked in; we have to keep the momentum, and the decision process is not always simple. First of all, I go for it to compete. To win… honestly, I find it difficult to predict a race like this. »

Nasser Al-Attiyah: « This time the Dakar will be different. All in one country, 70 percent sand dunes, it will be really hard. We need to respect all the drivers. This time we have a really good car. Last year we finished in second place and we’ve improved a lot since last Dakar. Last year, we had a few problems. My aim is to win this Dakar for Toyota. The race is shorter, we need to be really focused and not lose any time with the navigation. » Toby Price: « I ended up breaking a scaphoid, on the right side, but we got it fixed and it should be half-decent. We’ll see how the race goes, we’re here and that’s the main thing. I’m happy to kick the race off. There’s a little bit of pain, for sure, the scaphoid’s not the best bone to be breaking, but I’m still comfortable. I’ll take it relaxed, looking forward for the right position where we can fight. Everyone’s here to win, we’ll definitely go full gas. All the teams have got top riders. Even if KTM has been winning everything for a while, no one is the boss of the Dakar. »

Ignacio Casale: « I felt that after two triumphs in the quad category, it was time to try something new and give my body a bit of a rest. I thought about taking a break from the Dakar for a year, but when the opportunity of taking part in the SxS category presented itself, I jumped at the chance straight away. It’s the category of the future. It’s also an important challenge in my opinion, because the vehicle has been entirely developed in Chile. My main goal is to enjoy myself and then we’ll see just how I can play a role in the general standings as the days go by. »

Vladimir Chagin: « The start of the new race season will be hot. Peru is famous for its sands, great dunes and dangerous careens. Such a race is always unpredictable and therefore exciting. This is a fight between people, nerves and vehicles. Competition in the truck category is very high. The fight goes in minutes, in seconds. Our truck must be powerful, fast, light and perfectly reliable. We’ve gone through a difficult process of development, search for new solutions and preparation for the upcoming race and we hope to show a result that will make our partners and fans happy. »