In just a few hours the wait will be over, and it will be time for the X-raid MINI JCW Team to get down to business at the 2019 Dakar Rally. However, the past few days in Lima have been far from boring: the team and drivers have had plenty to do. As well as the final technical preparations, they were also faced with a number of media appointments in the Peruvian capital.

Having collected all three MINI John Cooper Works Buggies from the port in Lima on Thursday, the next major event on the schedule was the Shakedown the following day. The three crews had the opportunity to make the final adjustments to their buggies in the dunes outside the Peruvian capital. 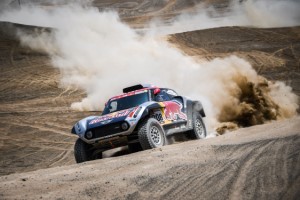 Saturday the mechanics and engineers were then able to prepare the MINI JCW Buggies for the challenges awaiting them over the next few days. Meanwhile, the drivers were in PR mode: Carlos Sainz, Stéphane Peterhansel and Cyril Despres first attended a MINI press conference with their colleagues from the X-raid MINI JCW Rally Team in the morning. The trio then headed to Red Bull in the Dakar Village, where they faced further questions from journalists. They then posed for selfies and signed posters for delighted fans during an autograph session.

Sainz, Peterhansel and Despres made the trip back to the X-raid service park with team principal Sven Quandt in a rather special vehicle: a tuk-tuk in Red Bull livery put a smile on the faces of drivers and fans alike. 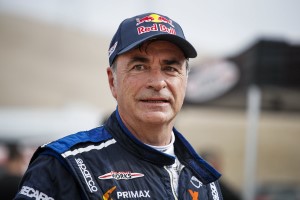 After the technical and administrative checks on Sunday morning, the afternoon will be all about celebrating the conclusion of the days in Lima. The participants and their vehicles will all be presented to thousands of fans on the start podium.

The opening stage from Lima to Pisco gets underway tomorrow, and Stéphane Peterhansel can hardly wait. « For a driver, the days leading up to the start are just about waiting to finally get going. Sure, we have plenty to do, but we are here to do a job in the race cars. Tomorrow, the wait is finally over. »