The final obstacle before the first stage of the 2019 Dakar Rally has been overcome. Monster Energy Honda Team is now officially in the race after getting through the verifications on Saturday in Lima.

After an entire season preparing for the Dakar, Monster Energy Honda Team are all set for the big showdown. A lot of water has flown under the bridge since Kevin Benavides lifted the runner-up trophy in the 2018 edition, but the team is fighting fit and fully present for the start of the 41st edition which gets underway with a ceremonial starting ramp in Lima tomorrow and Monday’s first full stage from the Peruvian capital to Pisco. 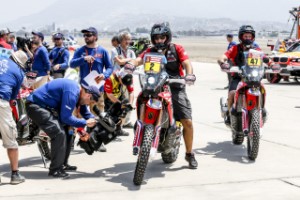 On Monday, January 7th, the first real stage of the 2019 Dakar Rally starts out on a route from Lima to Pisco, including just 84 kilometres against the clock, out of a total course of 332 kilometres. The first rider to tackle the special sets off at 09:30, Peruvian time.

Paulo Goncalves #2 : « We are ready, with the shakedown out of the way and also the verifications. Yesterday I felt good, I rode painlessly after the operation I had and I’m ready to start. The race will be difficult and long, and you have to take it with caution, trying to get through the stages every day and arrive as best you can to the goal. I expect a Dakar with lots of sand and many dunes… but in the end it is still the Dakar. There will be a bit more sand than normal but that’s the way the Dakar is. » 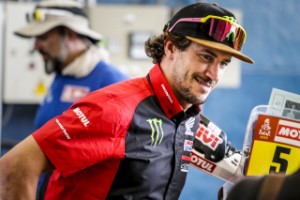 Joan Barreda #5 : « We are now all set to race after a long season preparing this Dakar. Yesterday, in the shakedown, everything was positive and I think we are ready to fight for the title. The whole team has worked hard and the war starts on Monday. I expect a hard, difficult Dakar, a real Dakar even though it is all in Peru. I’m confident that in this edition the navigation will be a decisive factor. »

José Ignacio Cornejo #10 : « Everything is ready to start this Dakar 2019. We are very motivated to fight for Monster Energy Honda with everything we have. This year I arrive here in much better shape than last year. We will try and improve on the 10th place finish from last year. I am very happy to start here in Peru and we hope do the best that we can in the race. »

Ricky Brabec #15 : « We did our final shakedown one day ago. Today, two days before the beginning of the actual Dakar, which was dedicated to the technical inspections and verifications. It’s the longest day of the rally. You have to go across town and sign papers and check gear and bikes. It’s not as easy as it looks. It’s the day that no one likes. It has to get done. The organisation is really good at this: a lot of safety equipment, they want to make sure you have enough water on the bike and a good helmet… We have five healthy riders and I have high expectations. I have put too much money in this not to get a good result. I hope I do good and push all ten days with good results every single day. » 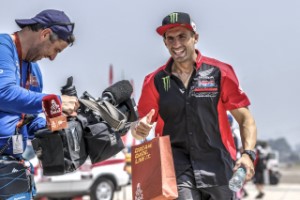 Kevin Benavides #47 : « Everything is ready. Yesterday we tried out the bikes and it went well and today we passed all the administrative and technical checks and I am very happy with the work done so far. I feel very good physically and mentally and have great expectations for the race and am eager to fight for this new adventure and fight for my goal: the Dakar. »