Overdrive Racing’s Yazeed Al-Rajhi suffered a setback in his quest to win the 2022 FIA World Cup for Cross-Country Bajas title when a cruel alternator belt failure cost the Saudi the outright lead and potential victory in Portugal’s Baja Portalegre 500, the sixth event in this year’s eight-round series.

The Saudi again teamed up with German co-driver Dirk von Zitzewitz in the middle of a hectic few weeks of racing that has taken the pair to outright success at two events in the Saudi Toyota Desert Championship and fourth and third places at the last two rounds of the FIA World Rally-Raid Championship in Morocco and Spain. 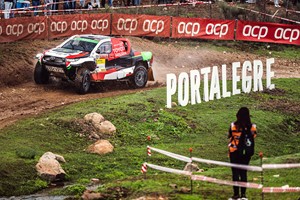 Al-Rajhi finished third on the Qualifying Stage, won stages two and three and was heading for glory when the belt failed shortly after the start of SS4 and he was forced to make emergency repairs in the stage. The resultant time loss was over 70 minutes and pushed the Saudi down to 26th in the rankings. In the absence of main title rival Miroslav Zapletal, he still remains firmly in contention for the title with two events still to run.

The Portuguese duo of Lourenço Rosa and Joaquim Dias continued their preparations for the Dakar Rally in January in a second of the latest specification T1+ Toyotas. They impressed on day one before power steering issues cost them time on the first stage on Saturday. A determined fight back netted Rosa the sixth fastest time in the final timed section and he climbed back to finish eighth.

Miguel Barbosa ran a third Overdrive Racing Toyota Hilux with Hugo Magalhães as his co-driver. The multiple Portuguese national champion had finished 35th on the Dakar Rally earlier this year with Pedro Velosa. He won the Qualifying Stage and was third on SS2 in the latest T1+ version of the Toyota before enduring his own delays in stage three. Miguel shadowed Rosa to the finish of the last selective section and was classified in 11th overall.

Both Barbosa’s and Rosa’s cars ran under the BP Ultimate Adventure Team banner. 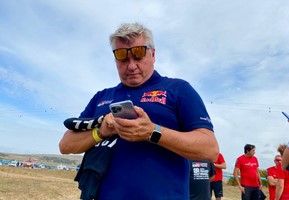 Action got underway with a 3.71km Qualifying Stage at Coutades on Friday morning and this determined the start order for the shortened 59.61km section on Friday afternoon that started close to Ponte de Sur.

Al-Rajhi carded the target time of 2min 59.0sec and that stood as the third fastest time giving the Saudi the opportunity to select a favourable starting position for the longer stage. Barbosa came home with the quickest time of 2min 58.4sec and Rosa was just 0.1sec behind in second.

The Overdrive Racing trio opted to start the longer stage from first, fifth and sixth positions. Al-Rajhi clocked the best time of 43min 43.4sec for the short stage to beat João Ferreira by 23 seconds and head into the night halt with a lead of 52.5 seconds over the Portuguese. Barbosa was third to hold a similar position in the rankings and stage opener Rosa was fourth. 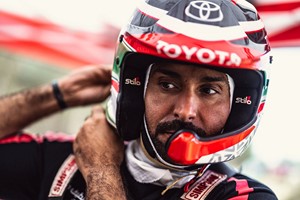 Al-Rajhi’s co-driver Von Zitzewitz said: « Both stages went very well for us. The Qualifying Stage, we finished third and we won the second one. We have to open on day two and we hope there will be enough traction on the road to do a good job. We passed one car (João Ramos) parked after the third or fourth water crossing. It was deep and quite scary. The stage was nice and flowing and a little rough in places. »

Rosa said: « For the first time in my career opening the track in an all-road test. It was a unique and fantastic feeling. »

Barbosa added: « It was a positive day with the victory in the Prologue and the fact we had the first test with the new car at full strength. We tried to keep a good pace in the afternoon, but we feel in the faster zones we were not exploiting the car’s capabilities. »

Saturday’s action began with a run through a shortened 179.64km stage and concluded with a 204.66km timed section in the afternoon.

The opener started in Ponte de Sur and finished in Alter do Chão. It was a tense affair from the start and Al-Rajhi managed to beat Ferreira by just 4.3 seconds to lead the Baja by 56.8 seconds. Rosa completed the stage 16min 12sec behind his Saudi team-mate after power steering issues and slipped to 11th in the rankings, while Barbosa was a further 9min 38sec adrift and held 28th. 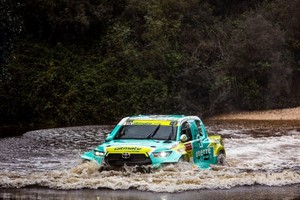 Crews began the final stage out of the village of Nisa and finished in Portalegre at the same point as the stop line of the Qualifying Stage. While Rosa and Barbosa managed to reach the finish after the onset of torrential rain and wet and muddy conditions to confirm eighth and 11th overall, Al-Rajhi stopped to replace a broken alternator belt and lost his chance of claiming the win and points for the championship.

Competitors now head to the Kingdom of Saudi Arabia for the seventh round of the series in the city of Ha’il on November 10-12.