– Nestor Girolami and Esteban Guerrieri kicked off the 2022 WTCR – FIA World Touring Car Cup season in style by claiming a 1-2 finish in Pau.

The ALL-INKL.COM Münnich Motorsport team-mates converted their front-row lockout – earned in Saturday evening’s qualifying session – into a lead off the line, and from there never looked troubled as they controlled the opening race on the Pau-Ville street circuit.

Nestor’s win was his sixth as a Honda Racing driver in the WTCR, and went a long way to ensuring he left the race weekend at the head of the Drivers’ Championship. 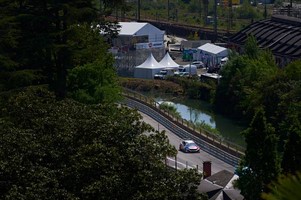 A seventh-place finish in Race Two gave the Argentinian a seven-point lead in the standings over compatriot Esteban, who was a strong fifth in the same race.

That completed a fine weekend for ALL-INKL.COM Münnich Motorsport, who lead the Teams’ Championship with 91 points.

Attila Tassi was robbed of an opportunity to double the Honda Civic Type R TCR win count for the day when he was pushed into the wall at the start of Race Two.

From second on the grid, the Hungarian launched better than the polesitter but was left with no space, as he hit the wall in avoidance before the inevitable contact from the other car – the driver of which earned a six-place grid penalty for the next round.

Attila dropped to the rear of the field as a consequence, but kept his LIQUI MOLY Team Engstler Civic Type R TCR in the race until the finish. Three points for 13th was his reward for that determination, though the missed opportunity compounded a disappointing day as he was earlier forced to stop just two laps from the finish of Race One while running eighth. 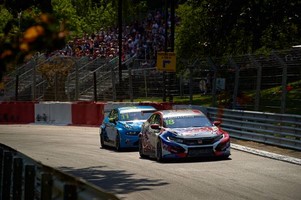 That was again because he was the innocent victim of contact, when he was hit from behind into the tight Turn 4 hairpin while executing a clean overtake.

He was able to complete that race, though the forced visit to the pits meant he ended up an unjust 17th.

While Attila suffered misfortune in Race Two, team-mate Tiago Monteiro made it three Civic Type R TCRs in the top 10 as he picked his way through the field from 15th on the grid.

That marked a decent salvage job for the Portuguese driver, who was always likely to face an uphill struggle after his qualifying was hampered by a difficulty to switch the tyres on.

It was a second points finish of the day too, after a 15th place in Race One.

Both drivers’ misfortune leaves LIQUI MOLY Team Engstler eighth in the Teams’ standings, with their results far from reflecting the performance shown over the Pau weekend. 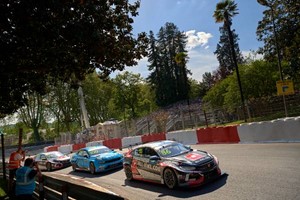 Néstor Girolami #29 – ALL-INKL.COM Münnich Motorsport : « I think we took all the points available this weekend, more or less, which is amazing. On a track where it’s such a challenge for everyone, not just us drivers, we were able to achieve so much – set up by a great lap in qualifying where I was confident to push the Honda Civic Type R TCR to its limits. That was not only important to steer the weekend but also because bigger points are now on offer in qualifying. I’m so happy with the way Rene and I worked together this weekend – he’s now my engineer as well as my team boss – and to win our first race together is great. We need to keep the momentum up and try to be smart this year, but this is the perfect start for that. »

Esteban Guerrieri #86 – ALL-INKL.COM Münnich Motorsport : « It was a really good day. I’m happy with how everything went, especially with the 1-2 in the first race. It was obviously all about the start, but we managed it very easily so Nestor and I could control the pace. That was great – a really excellent way for ALL-INKL.COM Münnich Motorsport to start the campaign. For Race Two, the start was difficult – it’s unfortunate for Attila that he had the door closed on him. I reacted quickly to brake and avoid it, but it was really close and I expected a hit to be honest. We settled into the race and tried to put some pressure on ahead, but my front tyres were giving way so I just tried to keep the car together. We’re very happy to be 1-2 in the Championship; it’s always better to have the points at the start so others have to catch you, so that’s the target achieved for this weekend. »

Dominik Greiner – ALL-INKL.COM Münnich Motorsport : « What an amazing result to start the season. The hard work with our testing and racing schedule in the Middle East has paid off: We did a big effort in Dubai and Abu Dhabi over the winter, and I think this weekend’s performance is the result of this. Both drivers did a great job in Race One with a good start, and afterwards they had a clean race, which is exactly what we asked for from the first race of the season. In Race Two they did well to avoid the incident at the front, and finished with more good points. Now we’re leading both the Teams’ and the Drivers’ Championships, so we’ll look to carry on like this at the Nürburgring for our home race. » 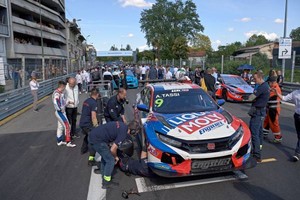 Attila Tassi #9 – LIQUI MOLY Team Engstler : « I’m disappointed that a weekend that had a lot of potential ended the way it did. Race Two was obviously the focus, so after I had the big hit that put me into the car ahead and broke my splitter at the end of Race One I felt it was best to stop to check it – even at 90km/h it was vibrating like hell. Maybe I can say with hindsight I should have stayed out because I was eighth, but I was afraid of doing more damage. In Race Two I had the better start from the front row but I just got squeezed and squeezed and couldn’t go more to the right until I hit the wall. I don’t want to rush into conclusions. The car was barely drivable after that, but I wanted to finish for the team, who put in such hard work to prepare the car. »

Tiago Monteiro #18 – LIQUI MOLY Team Engstler : « Not the best weekend on this side of the garage. We started off decently and were improving throughout the weekend, but in qualifying things were not easy and if you’re not 100% perfect in driving and set-up it just doesn’t work when the field is so tight. The first race was really strange – we tried some things in the car that didn’t go well, then midway through I locked up big time. In Race Two we decided to try something else completely different that was much better, but still not the level we would like to be. I took the opportunity presented to me with the crash, but after that it was difficult to follow the train. Still the team did a very good job all weekend – it’s just a case of getting everything to gel together. »

Franz Engstler – LIQUI MOLY Team Engstler : « Unfortunately, the results that we end the day with do not reflect the potential that the team has shown on its first weekend with the Civic Type R TCR. Attila drove really well in the opening race and only factors outside of his control stopped a very strong result. The contact that meant he had to pit unfortunately caused the mechanics more work, but they did an excellent job to have the car in a good shape for Race Two – which only makes the incident at the start more disappointing. But still, he showed the fighting spirit in the team to bring the car home and get points on the board, and Tiago’s recovery to 10th place meant we at least got some reward. » 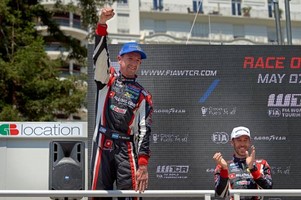