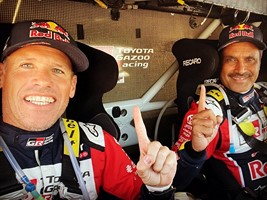 Partnered by Frenchman Matthieu Baumel, the Qatari won the first four of the five selective sections through the UAE’s Empty Quarter and was able to ease his pace on the final timed test to confirm victory by the margin of 21min 12sec in his Toyota Gazoo Racing Hilux.

Saudi Arabia’s Yazeed Al-Rajhi and Ulster co-driver Michael Orr had hoped to be battling it out for the championship, but a drive shaft breakage cost them dearly and Al-Rajhi fought back to finish in fourth place behind Russia’s Denis Krotov.

Dutchman Erik van Loon and French co-driver Sebastien Delaunay crewed Toyota’s latest Hilux T1+ Ultimate for the second time after a successful debut in Morocco last month. The car again set some competitive times and the Dutchman was the fastest of all the 2022 specification vehicles on the final stage. 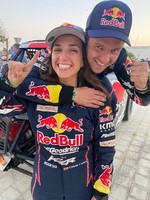 Cristina Gutierrez, partnered by French co-driver François Cazalet, secured the 2021 FIA T3 Drivers’ Championship with second place in the category in a Red Bull-backed Overdrive OT3. The Spanish girl began the event 11.5 points in front of Fernando Alvarez and managed to increase the advantage over her fellow countryman, who finished third in Abu Dhabi. When the dropped score rule comes into play, Gutierrez cannot be beaten by Alvarez regardless of the outcome of the final round next month.

Young American racer Seth Quintero teamed up with Germany’s Dennis Zenz and Belgium’s Guillaume de Mevius and Tom Colsoul paired together to drive two of the 2022 specification OT3s in a separate category with support from Red Bull. De Mevius, in particular, set some competitive stage times as the team prepares for Dakar. 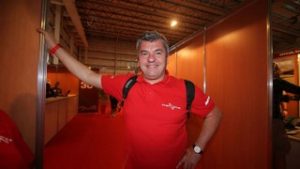 « Nasser is the master of the dunes and he did a fantastic race to win the first four stages, » said Overdrive Racing’s CEO Jean-Marc Fortin. « We did not want to reproduce what happened in 2017 with a big crash on the last stage, so he was cruising a little bit today. Lucio Alvarez, we have a new Lucio who won in Kazakhstan and is fighting for the second place in the championship. He even made sure that Nasser is not the champion yet. That is fantastic.
« We had P4 with Yazeed. He is getting back after his accident in Sharqiya. The terrain in the Desert Challenge is difficult. It was not easy to start but we made it. Erik (van Loon) made a good practice in T1+. We had a small issue with the transmission but we knew this rally would be demanding. We are fully confident for Dakar.
« We also have the good news that Cristina (Gutierrez) is the T3 World Champion. That’s really good. We pushed a lot over the last few years to get this result. She is very strong with a very strong character. The whole team in OT3 deserves this victory. Now we have a new product coming in 2022 for Dakar. We were testing this with Guillaume and Seth. We have a few weeks again to fix some small problems but we will be in Dakar. » 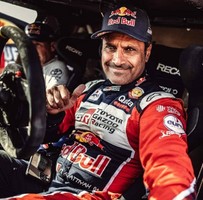 Al-Attiyah started confidently on the opening selective section of 265km between Abu Dhabi and Qasr Al-Sarab and he beat Poland’s Jakub Przygonski by three minutes to carve out an early lead. Title rivals and team-mates, Alvarez and Al-Rajhi, finished the special in third and fourth, but were 7min 11sec and 7min 57sec behind the Qatari, respectively.

Van Loon continued the development of the Hilux T1+ with a competitive time in a stand-alone class but De Mevius rolled the prototype OT4 in the dunes. « It was not the best day for us, » said the Belgian. « Seth came to help us. The new car is feeling good, the power, the gearbox and everything. »

The Qatari continued his impressive early form to win stage two by 3min 07sec and extend his advantage over Przygonski to 6min 07sec. More importantly, Al-Attiyah’s lead over both Alvarez and Al-Rajhi grew to 16min 53sec and 25in 40sec.

« We are quite happy, » said Al-Attiyah. « It was not an easy day because it took more than four hours driving, but it’s good experience and we learned a lot. It was very tough in the dunes near the border. That is good learning for Dakar. » 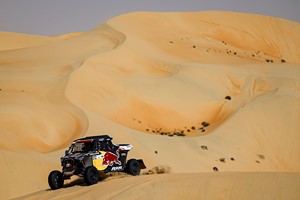 Gutierrez maintained third place in T3 but there were drive shaft delays for Van Loon in the 2022 category. De Mevius enjoyed a solid run that would have put him in fourth overall in the FIA section on the day.

Another fastest time on the third loop stage of 289.75km enabled Al-Attiyah to increase his lead over Przygonski to 11min 18sec and his title chances also received a boost when Al-Rajhi was forced to stop and change a broken drive shaft and the time loss of over 42 minutes dropped the Saudi to seventh in the rankings.

The second quickest time kept Alvarez in the hunt in third overall and it was a good stage for Van Loon in the T1+. Both Quintero and De Mevius incurred stage maximum time penalties, but Gutierrez was second in the T3 section and maintained third place. 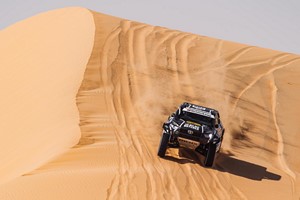 « A lot of broken dunes today and the temperature was very high, » said Van Loon’s co-driver Delaunay. « This is good testing for Dakar. We get a good feeling with the T1+ and we change the settings of the shocks now. It is extremely comfortable and more soft. We had a little issue with one shaft on day two. We change it and we were able to finish the stage. »

« It was a really nice stage but the first part was complicated in the dunes, » said Alvarez. « After the neutralisation, we pushed and finished second. Some parts were very tricky with the bumps and we needed a lot of concentration. »

Al-Attiyah made it four stage wins in a row on the last of the loops through the Rub Al-Khali. He beat Alvarez by 2min 15sec to take a lead of 23min 48sec into the final run back to Abu Dhabi. Al-Rajhi recovered well from his day three delays to set the fourth quickest time and climbed back to fourth place when Przygonski suffered his own delays.

Al-Attiyah’s co-driver Baumel said: « Some nice sandy tracks and dunes. Easy drive through the dunes for Nasser and nice navigation. For the navigator, you don’t have too much trouble here because every five or six kilometres you have a waypoint and you can’t really make a big mistake. I have one victory at this race and Nasser got two, but we didn’t compete here for the last four years and one time we were leading by far (2017) but had a crash on the last day. » 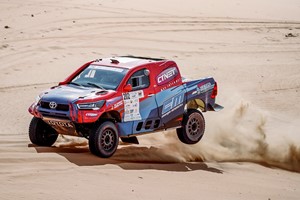 Despite a broken suspension arm, Gutierrez climbed to second in T4 when Pavel Lebedev retired and it was a good stage for De Mevius in the 2022 category.

The season reaches a climax at the Ha’il International Rally in Saudi Arabia at the start of December. 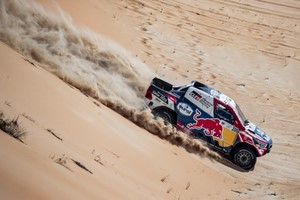