– Joaquim Rodrigus enters the top 5 in the overall rankings

Hero MotoSports Team Rally, the motorsports team of the world’s largest manufacturer of motorcycles and scooters – Hero MotoCorp, completed the second stage of the Abu Dhabi Desert Challenge with two of the three riders finishing in the top 10 positions.

Sebastian Buhler led the charge for the team, managing a fine balance of fast and safe riding, finishing fifth in the stage.

Joaquim Rodrigues finished the stage in sixth position, one better than his Stage 1 finish. Franco Caimi however did not have a good day as he encountered a technical difficulty around 120km mark in the stage, which brought his bike to a stop. 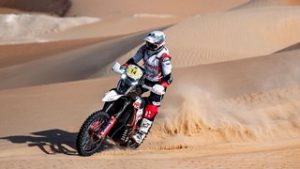 In the overall rankings, Rodrigues has now climbed up to fifth position while Buhler has also gained a place, and sits in the seventh position.

The second stage of the rally consisted entirely of dunes and covered over 333kms under the hot sun, before finishing at the bivouac in the desert. Stage 3 will see the riders cover an additional 293km in the desert with a relatively short liaison section of 35km.

Joaquim Rodrigues, Rider, Hero MotoSports Team Rally: « Today was another difficult stage. It is very rare for us to ride such long distances in the dunes, especially under such heat. I am still low on energy, so I am happy that I was able to push through and bring the bike to the finish line. I hope to recover fully soon so I can perform at a higher level. »

Sebastian Buhler, Rider, Hero MotoSports Team Rally: « Today was a very long and tough stage in the sand, one of the toughest stages I have ridden. Riding in these deserts is very tricky with long fast plateaus and sudden steep descents. Overall, I am happy with my performance and looking forward to the next stage. » 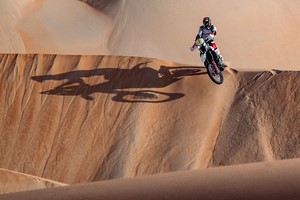 Franco Caimi, Rider, Hero MotoSports Team Rally: « I started with good pace, but sadly, due to some technical issues, I could not complete the stage. We had good pace and I was fighting for podium positions, so these are the positives we will take from this race. »