– Buhler and Caimi finish the stage in top 5

Hero MotoSports Team Rally had a great Monday in office as the team delivered a Top 5 finish in Stage 3 of the ongoing Rallye Du Maroc. Sebastian Buhler finished in the second position and Franco Caimi in fifth.

Starting the Stage from 17th position, Sebastian Buhler was on the pace immediately. Trialing new components on his bike in preparation for Dakar ‘22, he was within the Top 3 at every checkpoint, eventually finished in second place. 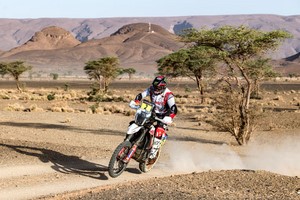 Franco Caimi also rode with the aim to gain more experience on the bike, while also sharpening his navigation skills in race conditions. His steady ride rewarded him with a fifth place.

Joaquim Rodrigues who still remains a contender for a top finish in the rally, delivered a determined ride. Despite losing time early in the stage he recovered well to finish in the ninth position. He remains at the 11th place in the overall rankings.

Joaquim Rodrigues, Rider, Hero MotoSports Team Rally: « Today was not an easy day for me. I made an error in navigation and lost a lot of time in coming back to the route. Also had a crash on some rocks, but I am unhurt. The bike was damaged a bit, so I took it easy after that, and was able to bring the bike to the finish with a good result, so I am happy with that. »

Franco Caimi, Rider, Hero MotoSports Team Rally: « I am happy to be back in the race after my problems earlier. It was a long stage and I am happy with the result. We were able to put some more mileage on the bikes and every bit of training and experience will help. Congratulations to my teammate Basti who finished second, so overall, it was a good day for the team. » 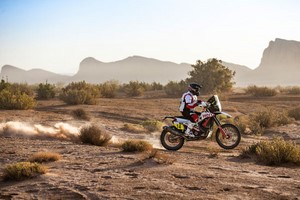 Sebastian Buhler, Rider, Hero MotoSports Team Rally: « Very happy with the stage today. It was hard and fast with some dangers, but I felt good on the bike and was able to get into a good rhythm. We had some problems in Stage 2 with some of the parts that we were testing, but thanks to the team. who worked hard and found a solution. »