International visitors have now arrived in Western Kazakhstan to make their final preparations for the start of the second round of the FIA World Cup for Cross-Country Rallies and the opening phase of the FIM Cross-Country Rally World Cup. The event takes place over five selective sections between Wednesday and Sunday.

Competitors, media and officials arrived at Aktau airport on two charter flights from Warwaw’s Chopin airport and Moscow’s Vnukovo airport on Sunday evening and the early hours of Monday morning. 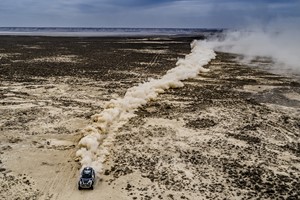 With equipment already in situ at the service park, adjacent to the Caspian Sea, teams will now make their last minute preparations before the competitive action gets underway.

Tomorrow (Tuesday), all competitors will pass through administration and technical checks before motorcycle and quad riders tackle a short super special stage from 16.00hrs to determine the starting order for the opening selective section on Wednesday.

Several will then join leading drivers at the pre-event press conference from 18.00hrs. The start ceremony then gets underway at 20.00hrs.