The Monster Energy Can-Am Team narrowly missed out on outright victory but three of the team’s four Can-Am Maverick X3s finished inside the top five in the SSV T4 category at the Dakar Rally.

Lining up against 40 rivals in the increasingly popular SS T4 section was never going to be easy but young American Austin Jones and his Brazilian co-driver Gustavo Gugelmin led the event after stage one in their Monster Energy Can-Am and were third at the rest day. The Arizona-based racer snatched the outright lead on day eight and then held second place for the remainder of the race to confirm the runner-up spot behind Chilean racer Francisco Lopez and his navigator Juan Pablo Latrach. 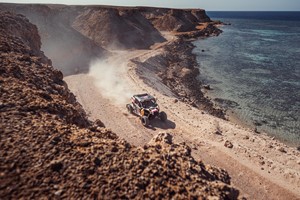 The Polish duo of Aron Domżala and navigator Maciej Marton finished third overall in the second of the four Monster Energy-backed Can-Ams. Domżala led the T4 section at the rest day after a stage win and a third fastest time, but a drive shaft issue and tyre problems thwarted his progress during the second half of the rally and, despite leading after day seven, he slipped to third place over the last five days – a position he held to the finish.

Reinaldo Varela drove the third of the Monster Energy cars with co-driver Maykel Justo reading the road books. The experienced Brazilian was sixth at the halfway point after minor time delays on the opening stages, but he enjoyed a much stronger second half of the rally and two third fastest times and a stage win on the last day catapulted Varela into fifth overall. 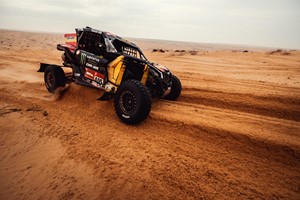 Spaniards Gerard Farrés and Armand Monleón crewed the fourth of the Monster Energy-backed Can-Ams. After losing time during the first week with fuel issues, Farrés was classified in 15th overall at the rest day, but a fifth and a second fastest time pushed him up to 11th on day 11, a position he held to the finish.

Monster Can-Am Team’s Scott Abraham said: « It was a great race for the team. It was definitely one of the harder Dakars we have faced in recent years. Austin Jones put in a phenomenal effort. The young American was in the top three from day four and maintained his position, leading twice during the rally. He didn’t give up until the end and earned a very well deserved second place.
« Aron Domzala consolidated his position in third. It was a super tricky event with everyone in contention. Reinaldo came home in fifth and Gerard Farrés came back from a bad fuel issue that didn’t just hamper our cars, but others as well. It was a great result for the Monster Energy Can-Am Team. » 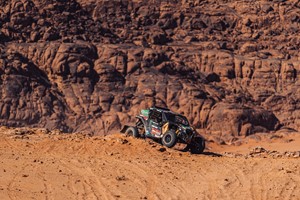 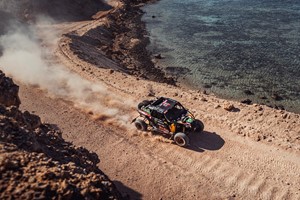