Nasser Al-Attiyah took a small chunk out of 13-time champion Stéphane Peterhansel’s now 17-minute lead in the final days of the Dakar Rally. And in the bike class Sam Sunderland continues to chase the leading duo.

Here is all you need to know
– Ahead of Thursday’s penultimate stage, Al-Attiyah kept his hopes alive by taking 49 seconds off Peterhansel’s overall lead on the 10th stage, a 342kilometre timed special stage.

– But the event remains wide open with 464km awaiting the remaining field from Al Ula to Yanbu. Al-Attiyah warned his rival: « The key to this Dakar will be tomorrow. It’s a really, really difficult stage. » 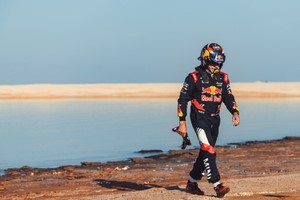 – The rival pair were joined in the top five by defending champion Carlos Sainz, who remains in third place overall but more than an hour out of contention. And Sainz said: « The first part of the stage had very tricky navigation and we lost quite a bit of time. After that, things got better but it was still not easy because of all the dust. We had to get past six or seven cars. It wasn’t easy. »

– Kuba Przygoński currently lies in fourth overall, which would match his best-ever Dakar finish if he can hold onto it to the finishing line. Ahead of the marathon stage, he said: « We don’t know exactly what to expect tomorrow but we know it will be hard. »

– Kevin Benavides leads by just 51 seconds from Ricky Brabec with Sunderland, of the Red Bull KTM Factory Racing team, in third and with just a 10-minute deficit to make up. « I made quite a few mistakes today which is a bit disappointing, » said Sunderland. « I’m trying to do my best, as is everybody. »

– Daniel Sanders remains within touching distance of the podium in sixth place in what is his Dakar debut and admitted on the final 100km of Wednesday’s he had stepped back to save energy. Meanwhile, Matthias Walkner was left to ponder what might have been without his two-hour stoppage on stage two with a fifth top-five stage finish. 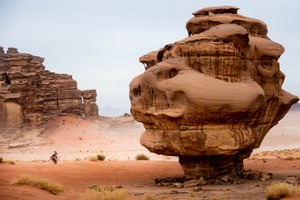 – Elsewhere in the bike class, Laia Sanz admitted to struggling through a tough day in the saddle. « I got lost at the beginning, » she admitted. « Then I was behind the quads and the other bikes, nobody would let me past. It was so dangerous. I was completely in dust for 200km. »

– Chaleco Lopez could not pick up a sixth stage win in the lightweight vehicle race but still leads by 10 minutes. Seth Quintero, who had to be towed back to the bivouac because of gearbox trouble on Tuesday, bounced back from arriving at 4.30am to make Wednesday’s start. 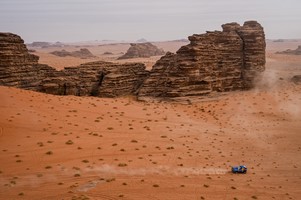 – Mardeev said: « The day went well, the main thing is that the team kept the positions in the general classification. »