The 2021 Dakar Rally continues to go up through the gears as Stage Five offered a variety of offroad challenges. There were massive dunes to cross, stony sections that threatened punctures and tricky navigation throughout the 457-kilometre timed special stage. Let’s find out who managed to put a clean run together on the route between Riyadh and Al Quisumah.

The battle at the front of the car race between Stéphane Peterhansel and Nasser Al-Attiyah raged for five hours today, but still there’s just a little over six minutes separating them.

« A real Dakar stage. Really complicated navigation and also not easy on the dunes. » – Stéphane Peterhansel

Giniel de Villiers finally got the trouble-free run that has been eluding him at this Dakar and was rewarded with the stage win.
« Since the beginning things have really not been going our way. Then today everything seemed to click into place. » – Giniel de Villiers

It was a challenging day behind the wheel for Kuba Przygoński, Carlos Sainz and Sébastien Loeb as their individual pursuits of consistency continue.

Cyril Despres and co-driver Mike Horn showed incredible esprit d’équipe when they cannibalised their own Peugeot 3008 DKR Maxi to provide team-mate Sheikh Khalid Al Qassimi with an A-arm when he broke down 800m from the finish line.
« Lots of valleys, lots of canyons, lots of dust. 25 cars turning around in the same place. This was a tough way to start the stage. » – Cyril Despres

« Today started off a little weird with everybody getting lost. We ended up finding the way for everybody so the whole pack came up behind us. » – Seth Quintero

Blue is the colour in the truck race as Team Kamaz Master controlled from start to finish. Andrey Karginov won the stage as Anton Shibalov moved into second place overall behind race leader Dmitry Sotnikov. Kamaz won the Dakar 16 times in the last two decades, a third decade of dominance looks like it’s beginning here in Saudi Arabia.

A late surge from two-time Dakar winner Toby Price on Stage Five saw him take a podium finish. The Australian has also moved to within touching distance of the overall podium. Price is now fourth overall and less than four minutes behind race leader Kevin Benavides.
« All in all, we made it a decent day and we’re not far from the Rest Day now. » – Toby Price

Štefan Svitko and Dakar rookie Daniel Sanders are well placed to break into the Top 10 of the general classification on the remaining seven stages.
« In the dunes things were well set so I just started sending it. I hit some pretty good jumps along the way. » – Daniel Sanders

Laia Sanz is on course to be the Dakar’s top female rider for the 11th consecutive edition and Camille Chapelière is enjoying his debut ride at the rally.

Unfortunately the last two stages have seen the withdrawals of Mohammed Jaffar and CS Santosh. We wish both riders a speedy recovery from their injuries. 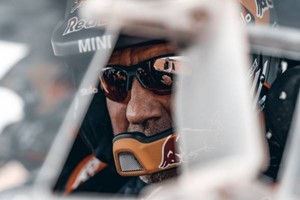 QUOTES
Stéphane Peterhansel: « A real Dakar stage. Really complicated navigation and also not easy on the dunes. It was tough the whole way but it also felt good to drive. Today was a challenge all the way. »

Nasser Al-Attiyah: « It was not easy to open. We saw a lot of bikes coming and we got confused. At the beginning, we lost maybe eight or nine minutes. I’m happy to have got here finally. Stéphane did a very good job because he stayed behind me all the way. I’m quite happy to finish day five and tomorrow Stéphane will open and it will be easier for me. We’re taking it one day after another and we’ll see where we are. Next week will also be very difficult. » 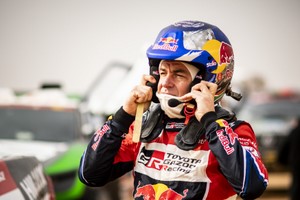 Giniel de Villiers: « Since the beginning things have really not been going our way. Then today everything seemed to click into place. Alex (Haro, co-driver) did a great job with the navigation. Some places were really, really difficult. »

Kuba Przygoński: « Today was really tough navigation. We were losing the good way so many times. The first 100kms we lost a lot of time. We were with a big group of cars, all lost. It was not an easy stage. » 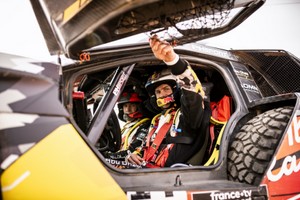 Cyril Despres: « You needed to gamble on this stage because of how it was with the navigation. Lots of valleys, lots of canyons, lots of dust. 25 cars turning around in the same place. This was a tough way to start the stage. »

Toby Price: « The first 200km were really technical navigation, even tougher than days one and two. Unfortunately we made a few mistakes. All in all, we made it a decent day and we’re not far from the Rest Day now. »

Sam Sunderland: « Day five is in the books and done. It was a really difficult stage that started off with a lot of tricky navigation. Lots of places were looking the same and there weren’t many references. I did a few circles there in the first part and then after the refuel I tried to push to recover some time. » 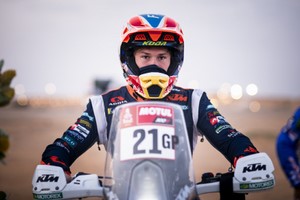 Daniel Sanders: « We lost so much time in the morning. Then in the dunes things were well set so I just started sending it. I hit some pretty good jumps along the way. By the end of it I was so tired, but the boys just kept on pushing to the front pack. »

Matthias Walkner: « Things started really bad for me. In the first 60km I already lost 35 minutes. It was frustrating. After 100km I tried to push really, really hard to try and close the gap. I enjoyed parts of the stage but it was not the best day for me. »

Camille Chapelière: « It was not easy with the navigation at the beginning, but aftet that my rhythm was getting better and better. I was just behind Laia (Sanz) for a lot of the stage and this helped me to learn a lot. »