There is still quite some work to be done on The Beast before it can start the prologue of the Dakar Rally 2021 tomorrow morning, but Tim and Tom Coronel are not concerned about that. At the end of the technical and administrative scrutineering at the King Abdullah Stadium in Jeddah, the brothers are as relaxed as ever. « The Beast can do it, we can do it. We are ready », says Tom.

Tim and Tom – and the rest of the Coronel Dakar Team – have been in Saudi Arabia for almost a week. After arrival they had to be quarantined for two days before undergoing another covid test. Only with a negative result, they were allowed to pick up the car at the port. « It all took a bit longer than we had expected, » says Tim. « And because of that, we were only able to do the last things on the car later than we had planned. Fortunately, the car doesn’t have to go in a parc fermé this time, so we can continue working until the start of the prologue. The boys had been working so hard already in the past months! But we can be happy that the Dakar can take place at all, so we are not complaining. » 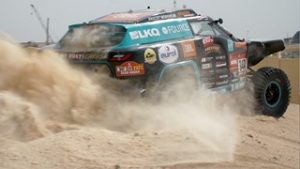 Yesterday, Tim and Tom tested the car one last time on a specially designed shakedown site 50 kilometres from Jeddah. « Once released after the pcr test, it was nice to hear and feel The Beast in the sand again, » says Tom. « We went into the dunes for a while. It seems as if we have a patent on it, but after 200 meters we were already stuck. So much for that. »

For the prologue on Saturday morning, a stage of 11 kilometres, the brothers are not at all concerned. Tom: « We’re going to do it as always: chill, at our own pace. We are in no hurry. Three minutes more or less or a starting position more or less, that doesn’t matter much. Nobody is going to win the rally on a stretch of 11 kilometres. » Tim: « Let’s build it up slowly. We start as the 47th car and it is no more than a short trip. From Sunday on it’s game on. » 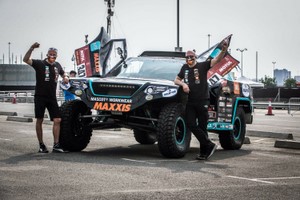 From 3-15 January 2021, the Dakar rally will be held in Saudi Arabia for the second consecutive year as part of a multi-year agreement between the country and Amaury Sport Organisation as the promoter of the event. Like in previous years, Tim and Tom Coronel’s achievements during the Dakar rally will be covered in detail in the daily broadcasts on Dutch TV station RTL7.