‘Hail Rally Toyota 2020’ roared into life at Al-Maghwat on Thursday afternoon and the forthcoming back-to-back desert rounds of the FIA World Cup for Cross-Country Bajas will decide the outcome of the various off-road championships.

Fifty-four FIA cars, 27 motorcycles, 25 quads and one truck and over 30 additional cars competing in a National Rally were scheduled to be flagged away from the ceremonial start by Saudi Automobile and Motorcycle Federation (SAMF) President, H.R.H. Prince Khalid bin Sultan Al-Abdullah Al-Faisal, in the company of distinguished guests and members of the FIA cross-country community.

Dutchman Bernhard Ten Brinke will start the opening selective section on Friday morning with a 1.5-point over Russian Vladimir Vasilyev in the FIA Baja Drivers’ Championship. Both are seen as clear favourites to duel for the title, but mathematically several other drivers are still in with a chance of snatching the coveted crown. 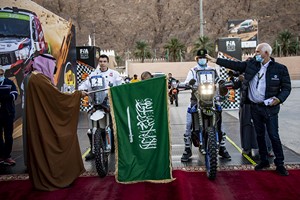 Two top results could lift Poland’s Aron Domzala into contention, while the Russian duo of Denis Krotov and Vasily Gryazin and Poland’s Jakub Przygonski could well spring late surprises. There are still numerous permutations with top seeded drivers like Nasser Saleh Al-Attiyah, Yazeed Al-Rajhi, Stéphane Peterhansel and Carlos Sainz also in contention. The eventual outcome should be much clearer by the end of the first of the two Bajas on Saturday afternoon.

While capturing the overall crown may be a long shot for Domzala, the Monster Energy Can-Am Maverick X3 driver is the favourite to lift the new FIA T4 title after claiming category wins in Poland and Portugal. He reaches the start line with a 14-point cushion over Dutchman Kees Koolen, the latter driving a South Racing Can-Am. 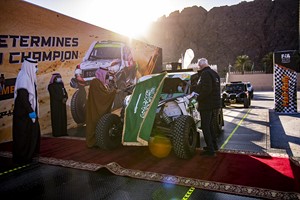 Gryazin, meanwhile, will be hoping to secure the FIA T3 title in his SRT Can-Am. Standing in the Russian’s way will be the talented young Belgian and Baja Portalegre winner Guillaume de Mevius and local drivers Saleh Al-Saif, Ibrahim Salmani and Abdullah Al-Shegawi. Camelia Liparoti drivers one of two X-raid Yamaha Racing YXZ 1000s and will be joined by former DTM champion Mattias Ekström on the second Baja from December 14-16.

The Belgian Overdrive Racing operation holds a 6.5-point advantage over the Russian G-Energy Team in the battle for the FIA Baja Teams’ Championship. Monster Energy Can-Am and G-Force Motorsport are third and fourth.

Friday
The first Baja starts with a 251.81km Radifah selective section on Friday with the top seeded FIA entrant beginning the stage at 08.58hrs.

The day’s route winds its way through the An Nafud desert to the north-west of Hail. A passage control will be positioned at the 165.77km point.