A magnificent recovery drive by NSX GT3 Evo duo Toshiki Oyu and Nobuharu Matsushita brought the curtain down on another Super GT season in a dramatic race at Fuji.

Oyu arrived at Fuji as one of six drivers in with a chance of winning the GT300 title, but sadly, a technical issue on Saturday meant the ARTA NSX GT3 Evo was unable to take part in qualifying, meaning he and Matsushita started 30th and last. 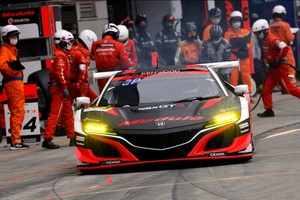 Throwing caution to the wind, the pair blended searing pace with clever strategy and slick pitwork to climb to seventh by the chequered flag; a result that netted Oyu fourth in the Drivers’ points and ARTA fourth in the Teams’ rankings – a year after winning the crown.

All three cars were competing as part of the NSX GT3 Customer Racing Programme; a global collaborative project with JAS Motorsport responsible for assembly of all cars.