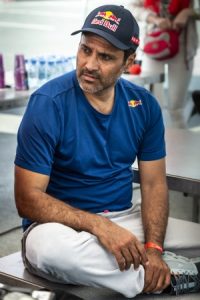 Al-Attiyah led the day’s stage from start-to-finish in his Toyota Hilux. He had edged 27.2 seconds in front of Al-Rajhi by the first checkpoint and gradually pulled away from his rival to reach the finish of the stage, south of Doha, with an impressive advantage.

The six-time event winner said: « It’s never easy because the road is really difficult from the beginning. We didn’t make any mistakes, except one flat tyre, and then we need to manage without any mistakes and without getting lost. We have a good pace. Tomorrow is a long stage. Always in Qatar we have flat tyres but we try to manage with a good speed. »

Al-Rajhi and Ulster co-driver Michael Orr finished the day in a solid second place in the second of the Toyotas, despite losing their way for a short time between 98km and 101km of the stage. Al-Rajhi said: « We have one puncture today, after 120km, and we had no brakes before the finish for 40km. » 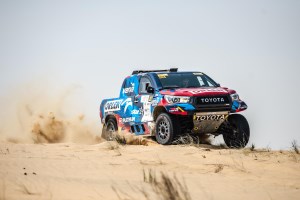 Poland’s Jakub Przygonski marked his first competitive appearance with the Overdrive Racing team with a third quickest time alongside German team-mate Timo Gottschalk. Jakub stopped for a short time on the run in to the finish and reached Lusail 10min 47sec behind the leader, but well clear of fourth-placed Khalid Al-Mohannadi.

« It was hard to get a rhythm today for us with the navigation and with the car, to go like we used to do, » said Przygonski. « We will try and fix some navigation problems between us and the cooperation tomorrow will be good. We changed a back tyre near the finish. » 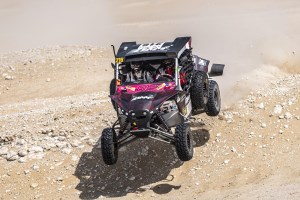 The Toyota trio were the class of the T1 field – Abdullah Al-Rabban led rivals Mohammed Al-Meer and Balazs Szalay early in the special, before stopping after PC1 with broken suspension after an accident. Szalay went on to finish the special in 14th place, over an hour behind the leading Toyota trio after losing his way for a time after 65km of the stage. Al-Meer came home in 15th.

A fascinating tussle was fought out in the T3 category with seven Can-Ams, a pair of OT3s, a G-Force T3 GF and two Polaris RZRs battling it out for stage honours. 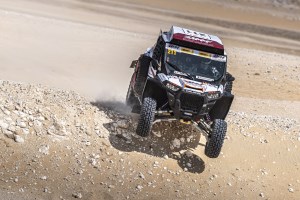 Khalid Al-Mohannadi and Sébastien Delaunay clocked the fastest time of 2hr 01min 39sec to claim the early T3 bragging rights and win the opening round of the Manateq Qatar National Baja. The Can-Am crew finished 35 seconds ahead of American racer Austin Jones and his Brazilian team-mate Gustavo Gugelmin. Defending FIA Baja world champions, Fedor Vovobyev and Kirill Shubin, were third, 10min 52sec behind the Qatari, after a rear puncture and a minor transmission issue. Saleh Al-Saif and Ahmed Al-Kuwari were fourth and fifth. 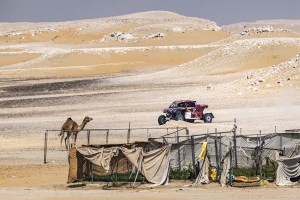 Overnight T3 leader Al-Mohannadi said: « Today, the strategy was not too much speed. No damage to the tyres and we finished. Sébastien is a very good co-driver, so no mistakes today. We will check our strategy in the morning when we see the road book and the route. »

Runner-up Jones added: « I drove at 50% all day. I just wanted to get a good groove with my new navigator. We rode about four kilometres together the other day. That is all. I drove slow, we took our time and wanted to see what the rest of the competition was about. Now we know where we are at, second place is good and we are excited to get it going for the longer stages. It’s hard to read the terrain. It’s all the same colour and very challenging. It’s hard to drive. I cannot imagine trying to navigate. » 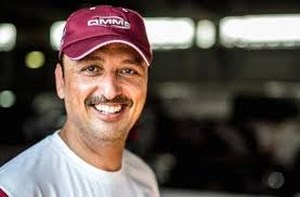 Adel Abdulla said: « Before the race we had an electrical problem. The car did North Forest (Baja Russia). They tried to fix it. It was misfiring sometimes. We thought it was fixed but, from the start, it was misfiring all the time in first, second and third gear. It was like no fuel going to the engine. I just drive one kilometre and the engine went off. We stopped for half an hour, then the engine started and we drove back to the stage start. »

Day one also included the first of three rounds of the Manateq Qatar National Baja with the entire day’s route counting as a scoring round of the five-event series. Twenty-one vehicles were eligible for championship points and victory on the day fell easily to Khalid Al-Mohannadi. 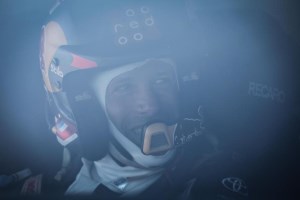 He guided his Extreme Plus Polaris RXR 1000 to a 15min 50sec victory over the Can-Am of Saleh Al-Saif. Ahmed Al-Kuwari, Mohammed Al-Harqan and Rashid Al-Mohannadi rounded off the top five.

The day’s stage features two passage controls on the Umm Bab Highway and on the Al-Khararra road after 54.07km and 93.61km, respectively, before finishing on the Sealine road to the south of Doha.

Monday
Tomorrow’s second leg is more demanding and includes a competitive section of 334.25km. The timed action starts off the Al-Shamal highway and winds its way along the north-eastern coast and across the northern deserts to finish off the Al-Kharsaah road. The day’s stage includes three passages controls on the Al-Zubara and Al-Jumailah roads and the Dukhan highway and finishes 92.44km from Lusail. 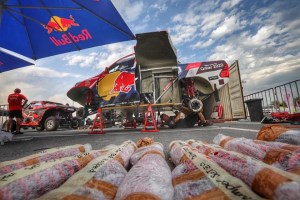 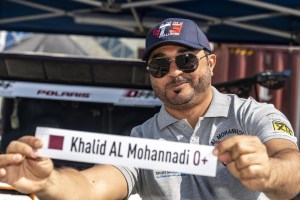