Newey, who impressively claimed a podium placing in his maiden Japanese-based Super Formula season last year, along with co-drivers Ben Hanley (GB), Henrik Hedman (SW) and Colin Braun (USA), brought the DragonSpeed Oreca home 2-laps ahead of their closest class rival in the Rolex 24 At Daytona.

Harri, contesting only his second 24hr sports-prototype race having claimed an LMP2 top-10 finish on his Le Mans 24 Hour race début in 2018, spent almost six hours in total behind the wheel of the Oreca which clocked up almost 2,890-miles at an average speed of over 120mph around the 3.56-mile Daytona International Speedway which marked his first race in America. 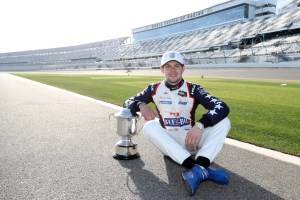 Newey, from Ascot near London, is hopeful of contesting more “endurance” races in the IMSA WeatherTech Sportscar Championship, the Daytona event opening the 2020 season.

Harrison Newey – Aged: 21. Born: Oxford, England. Lives: Ascot, England.
« To win what is my first race in America, at Daytona, which is such a legendary venue, is absolutely fantastic. We obviously came here with that ambition but knew it would be very hard to execute but we did it and in a dominant style.

« It was a clean run apart from a puncture four hours or so into the race, caused by debris, and then we changed the car’s nose, again due to debris. I did around six stints with quite a bit of driving in the night which I enjoyed. It’s a great way to start 2020 and hopefully leads to more drives in IMSA. »