The Saudi Automobile and Motorcycle Federation is organising the Riyadh Rally, round four of the Saudi Toyota Desert Rally Championship, out of the Kingdom’s capital this weekend.

Heading another impressive entry across the car, motorcycle and quad categories is the ultimate legend of the forthcoming Dakar Rally. Stéphane Peterhansel is the most successful biker and rider in the history of the event with six wins on a Yamaha motorcycle, three in a Mitsubishi and two in a Peugeot and a Mini.

On this occasion the Frenchman will use the new Riyadh off-road event as a useful shakedown for the Dakar Rally before it is staged in Saudi Arabia for the first time at the start of January 2020. Peterhansel wheel out one of the latest specification MINI John Cooper Rally Works Buggies built by X-raid and has his wife Andrea sitting alongside.

A former Dakar enduro rider and factory rally driver in her own right, the couple have already won the gruelling Abu Dhabi Desert Challenge this season and clinched the prestigious FIA World Cup for Cross-Country Rallies title for the first time.

Two-time Dakar Rally winner and former WRC star Carlos Sainz and fellow Spaniard Lucas Cruz will then replace the Peterhansels and join forces with the X-raid team to take part in the final round of the Saudi Toyota Desert Rally Championship in mid-December. 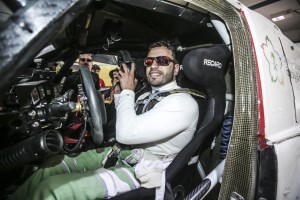 The German-based team also confirmed on Tuesday morning that local rallying star Yasir Seaidan will tackle the Riyadh event in one of the latest Buggies.

The Riyadh Rally is based at the Green Halls stadium complex in Riyadh City and is being organised by the Saudi Automobile and Motorcycle Federation (SAMF), under the chairmanship of H.R.H. Prince Khalid bin Sultan Al-Abdullah Al-Faisal and the supervision of former FIA Middle East champion Abdullah Bakhashab.

Teams will tackle 470 competitive kilometres in a route of 958km. Administration and scrutineering checks will take place tomorrow (Wednesday) before the official ceremonial start takes centre stage from 15.40hrs on Thursday afternoon in nearby Ad Diriyah. This precedes the opening Toyota Super Special stage of four kilometres, starting at 15.45hrs.

A longer Rumah selective section of 307km gets underway at 09.45hrs on Friday morning and a second timed section of 160km through the scenic Saad National Park brings the competitive action to a conclusion on Saturday. The ceremonial finish will take place later in the afternoon in Ad Diriyah.

The event is running with the support of the Saudi Automobile and Motorcycle Federation, the General Sport Authority, Abdul Latif Jameel Motors (Toyota), the MBC Group, Al-Arabia outdoors and the Saudi Research and Marketing Group.