As the Blancpain GT Series prepares to conclude its 2019 season with a three-hour Endurance Cup race at Circuit de Barcelona-Catalunya, there is one question on everybody’s lips: who will leave the Spanish venue with a championship to their name?

Some titles were settled at the Total 24 Hours of Spa, while others concluded during the Blancpain GT World Challenge Europe finale at the Hungaroring. Nevertheless, there is still plenty of silverware to play for when the campaign concludes in Spain this weekend – including the coveted overall crown.

Above all, this rewards consistency. History tells us that it is not necessarily won by the same drivers that triumph in the Endurance Cup or Blancpain GT World Challenge Europe; often, a crew that has been among the leading pack in both series will emerge with the overall championship.

This year, the battle for the top-tier drivers’ title could hardly be any closer. What’s more, it will provide the closing chapter of a story that has run throughout the 2019 season.

Two pairs of drivers are in contention for the big prize. At the top of the table, the #4 Black Falcon Mercedes-AMG duo of Luca Stolz and Maro Engel travel to Spain with 143.5 points. They will be joined at Circuit de Barcelona-Catalunya by their regular Endurance Cup crewmate, Yelmer Buurman.

They will be looking to repeat last season’s victory in Spain, which saw the #4 crew clinch the Endurance Cup title, and there is no question that the circuit plays to the strengths of the Mercedes-AMG GT3. But Stolz and Engel cannot afford to relax, with just two points separating them from the #563 Orange1 FFF Racing Lamborghini duo of Andrea Caldarelli and Marco Mapelli. As usual, their three-man Endurance crew will be completed by Dennis Lind.

There is history to this battle, with FFF and Black Falcon having competed all season long to clinch the Blancpain GT World Challenge Europe title. The 2019 campaign culminated in a straight fight between Caldarelli/Mapelli and Stolz/Engel, who proved to be the standout crews across the sprint-format championship. 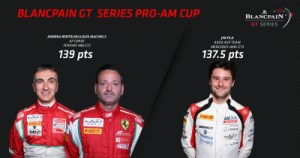 In fact, they were so closely matched that they finished level on points at the season’s end. The FFF duo ultimately won on a tie-break having taken more race victories, the first time that a top-tier Blancpain GT Series title has been settled in this manner. On one hand it will give Caldarelli and Mapelli added confidence heading to Spain; on the other, Stolz and Engel will clearly be out for revenge.

And there is another factor to consider: both of these crews remain in contention for the Endurance Cup title. They are outsiders, with the #72 SMP Racing Ferrari line-up leading the Black Falcon trio by 22 points and FFF by 24. Nevertheless, it is telling that both full-season squads have fought for each title until the deciding race. Whichever emerges as overall champion on Sunday evening will be a worthy winner.

Unsurprisingly, the battle for the Blancpain GT Series teams’ title is between the same two squads. The picture is a little different, however, as FFF leads the way on 160 points, with Black Falcon the only challengers on 148.5. The Lamborghini outfit’s advantage is thanks to its second Pro car, which scored a vital runner-up finish at Silverstone.

Both battles will be resolved once and for all in Spain. When the dust has finally settled on 2019, it will undoubtedly be remembered as the season of FFF Lamborghini versus Black Falcon Mercedes-AMG.

For the second year in succession, the overall Silver Cup crown belongs to Nico Bastian. Indeed, the German ace will complete a full sweep of class titles at Circuit de Barcelona-Catalunya by also picking up the Endurance championship alongside AKKA ASP Mercedes-AMG teammates Timur Boguslavskiy and Felipe Fraga. Earlier this month, Bastian and Thomas Neubauer secured the Blancpain GT World Challenge Europe title at the Hungaroring.

Given their domination of the drivers’ championships, it is no surprise that the teams’ title has already been wrapped up by AKKA ASP. The French squad will win all six Silver Cup titles in 2019, a remarkable achievement in an increasingly competitive class.

The overall Pro-Am teams’ title has already been secured by Ferrari squad AF Corse, but the battle for the drivers’ crown is incredibly close ahead of the finale. Louis Machiels and Andrea Bertolini (#52 AF Corse Ferrari) lead the way on 139 points, but they face immense pressure from Jim Pla (#87 AKKA ASP Mercedes-AMG) who is just 1.5 points back. The AF Corse entry will be completed by Niek Hommerson at Circuit de Barcelona-Catalunya, while Pla will share his Mercedes-AMG with regular Endurance Cup teammates Jean-Luc Beaubelique and Mauro Ricci.

These crews are evenly matched. In the Endurance championship, the #52 AF Corse Ferrari won at Silverstone while the #87 AKKA ASP trio triumphed on home turf at the Circuit Paul Ricard 1000kms. In Blancpain GT World Challenge Europe, Pla finished ahead in the final standings by just half a point, while the AF Corse drivers took more wins (two) and more podiums (eight) over the course of the season.

Both the top-tier and Pro-Am contests look set for incredibly close finishes at Circuit de Barcelona-Catalunya. With multiple Endurance Cup titles also being decided it promises to be a breathless three-hour contest – and the perfect conclusion an action-packed 2019 campaign.