Attila Tassi picked his way through a chaotic day of WTCR – FIA World Touring Car Championship racing at Ningbo International Speedpark in China to secure his highest weekend points total in the series.

A superb drive from 17th on the Race-Two grid to sixth in the race – which included passing two cars in one move on the final lap – was a fitting reward for the KCMG driver.

The Hungarian then added 12th place in Race Three in his Honda Civic Type R TCR to complete his 15-point haul.

Team-mate Tiago Monteiro was lucky to walk away from a high-speed collision with the pitwall in Race Three; an incident for which his assailant was given a drive-through penalty and investigated further.

The Portuguese driver had qualified 17th – a big improvement on his Saturday form –, but was pushed off the circuit by another car on the opening lap of Race Two and retired in the pits with the damage sustained as his Civic Type R TCR bumped over the trackside grass. 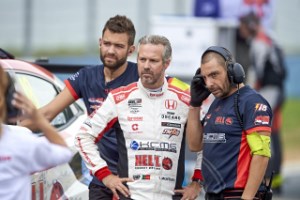 If the day was bad for Tiago though, it was positively disastrous for the man who began the day leading the Drivers’ Championship; Esteban Guerrieri.

The ALL-INKL.COM Münnich Motorsport driver put his Saturday maladies behind him to qualify sixth; one thousandth of a second slower than the time needed to progress to the Q3 pole-position shoot-out.

That was the highlight as he was spun into the wall by another car on the opening lap of Race Two and then suffered more contact at the same stage of Race Three and suffered a broken left-front trackrod, which snapped under safety-car conditions before half-distance.

Team-mate Nestor Girolami qualified a superb third, but lost his Q2 times when he was held responsible for causing a red flag in the session, putting him back to 17th and 12th for the two races.

Contact from another car put him out of Race Two and he was lucky to avoid a four-car collision at the start of the finale; eventually finishing eighth.

Münnich Motorsport have lost the lead of the Teams’ Championship as a result while Esteban and Nestor are now second and sixth in the Drivers’ standings. 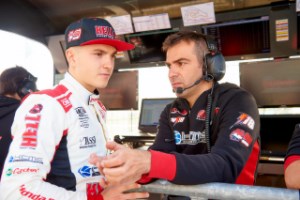 Attila Tassi #9 – KCMG
« If you’d told me yesterday that I’d have had my highest WTCR weekend points total here, I woudn’t have believed you, but I managed to stay away from the really big impacts. I think that was down to luck as much as anything else because the level of aggression shown on-track was very high. It’s not how I like to race, but I felt I had to be more aggressive just to stand my ground. »

Tiago Monteiro #18 – KCMG
« I’m ok, which is about the best thing I can say about this weekend. It was a big impact, but I was checked over and there’s nothing wrong with me. In all three races I was hit many, many times and it’s frustrating that we seem to have gone back to where we were in Slovakia and the Netherlands. It’s like nobody has any respect for anyone else on the track; we’re all just targets to be hit. I hoped I could avoid some of the chaos, like Attila, but it wasn’t possible. »

Esteban Guerrieri #86 – ALL-INKL.COM Münnich Motorsport
« Zero points this weekend. It’s the worst situation we could imagine and I’m now behind in the championship. I knew the last four rounds were going to get dirty. There are people who want to make sure I don’t score points. Sometimes you can escape this, but this weekend I could not. I got hit by a many cars in Race Two and was in the barrier, and then by another driver in Race Three, which bent my trackrod and caused it to break when the safety car came out. A really terrible weekend, but all I can do is forget about it and try to get some momentum back at Suzuka. » 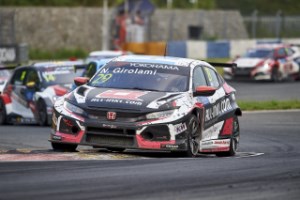 Nestor Girolami #29 – ALL-INKL.COM Münnich Motorsport
« I qualified third, which I was so happy with after what happened yesterday, but once qualifying ended, everything started to fall apart. The driving was too aggressive and the BoP situation is crazy. We can mask it a bit in qualifying because we have very good corner speed, but in a race situation, if someone is 10-15kph faster than you on the straights because that what the BoP allows, you cannot compete with that. I’m glad this weekend is over and I hope we don’t have another one like this for the rest of the year. »

Dario d’Esposito – Team Principal
« The main thing is that Tiago is okay after his accident and I was very pleased to see him walking away from the car. We will change the engine and the chassis now before Suzuka, which will take a lot of work. Attila has done a fantastic job. It’s his first time racing here and for a young driver who was on such a high after Vila Real, the long gap wasn’t ideal. He’s improved in every session, eventually coming away with a fantastic sixth place. He’s stayed away from the crashes and the contact and really deserves this. » Dominik Greiner – Team Manager
« To say this is a weekend to forget would be a huge understatement. To start with more than 70 points advantage in the Teams’ Championship and lose the lead in one weekend shows you the kind of luck we’ve had. The one positive of the weekend is that the spirit in this team is still incredible and the speed with which the boys fixed both cars after the damage in Race Two was amazing. This spirit will help us to go to Japan and put this one out of our minds. »