A positive all-round day for Monster Energy Honda as the team clinched the day’s top two positions: the stage win and the overall leadership for Kevin Benavides and runner-up spot for Joan Barreda on the day.

Today saw one of the longest stages of the rally with a total of 375 kilometres. The start of the 295-kilometre special was delayed for an hour after the appearance of fog along various stretches of the route between Copiapó and Vallenar. The day served up a combination of fast track, rivers, fesh-fesh, as well as some rocky mountain paths. 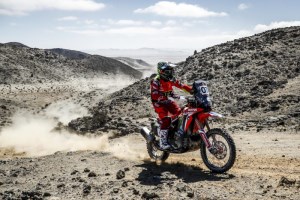 A high-speed Kevin Benavides, claimed the top honours with a pace that allowed him to chase down the top two riders from the previous day. As well as clinching the stage win, the rider also leaps to the top in the general standings of the Atacama Rally. Joan Barreda was likewise showing fiery pace to finish second, less than a minute adrift of his team-mate, also improving his position in the general rankings.

Local rider José Ignacio Cornejo chose to follow the pace of the riders ahead on a complicated stone-filled track. In spite of dropping time, he remains in a good position to take maximum advantage of tomorrow’s marathon stage. Ricky Brabec was unable to shine today, but managed to overcome a minor fall without excessive loss of time. In the general standings, the American remains at less than ten minutes from his Argentinean Monster Energy Honda team-mate, with plenty of chance to make headway in what remains of the race. 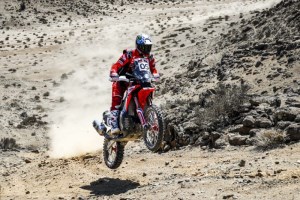 Tomorrow, Thursday sees the third stage from Atacama to Diego de Almagro with the bivouac located in Chañaral. This will be the first part of the marathon stage. When the stage finishes after 370 kilometres, riders will not be allowed to seek outside mechanical assistance should they need to service their bikes, instead having to rely on their own technical skills to carry out any repairs.

Kevin Benavides – STAGE: 1st OVERALL: 1st : « It was a beautiful special of the technical kind that I like. It was also very fast, with areas of rivers full of rocks, as well as some winding mountain hard track too. I think I did a good job. I reached Sunderland and Quintanilla but because of the dust I kept my distance from them until the end. Overtaking would have been to big a risk for too small a reward. » 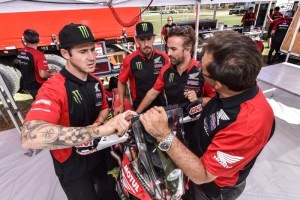 Ricky Brabec – STAGE: 9th OVERALL: 7th : « Stage two was not really my cup of tea. Really fast tracks today. I haven’t really been up to par with the fast, full gas, wide-open tracks with the navigation. I made two mistakes today and I had a little crash. I’m not too happy with the results, but we will fight again tomorrow and hopefully make up a little bit of time. I’m not too happy with the way today went, so I’ve got to re-set and look forward to tomorrow. » 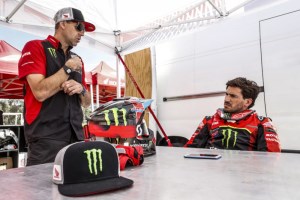 Joan Barreda – STAGE: 2nd OVERALL: 4th : « The second stage with a lot of kilometres – it was pretty dangerous. The first part was very fast with some areas of fesh-fesh and the second part very treacherous, in the mountains, full of stones and more fesh-fesh. It was a really hazardous stage. I tried to keep my concentration in the river areas and keep a steady pace while pushing hard. I think I had a good stage, getting better as it progressed and I was able to finish without any problems, so I’m happy about that. » 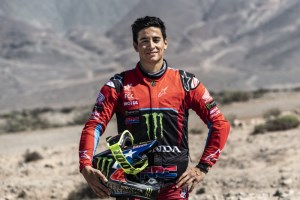 José Ignacio Cornejo – STAGE: 7th STANDINGS: 8th : « We have finished the second day – a very fast stage, with a lot of pace and some dangerous stone-filled parts and heavy fesh-fesh. I tried to push as hard as I could to try not to drop any time from the front-runners. I think that tomorrow we have a good starting position to try and attack from and hopefully get ahead in the general standings. » 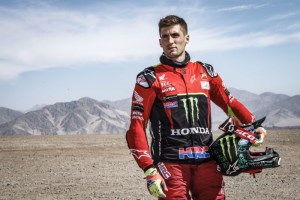 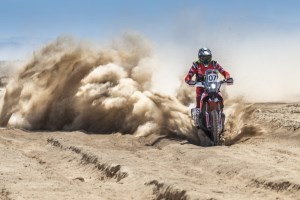