It was a very difficult day for the 84 riders and drivers today in the Transanatolia Rally 2019: a long and tough first stage that got all the competitors already really tired. The three special stages today were all very different from each other and also the temperature was not easy to cope with, as they started this morning from the Abant Lake with 16° degrees and finished this afternoon, few kilometers from Haymana, with more than 36°.

Leader of the overall standing in the motorbike category this evening is Maurizio Gerini (Husqvarna) who raced a fantastic stage, all day: Gerini won the 3 special stages always with the best crono time. Behind him there is the italian, Livio Metelli (Husqvarna), in second position with 8’29 » of difference: Metelli tried to attack Gerini, but in the same place had to defend another strong rider, Nicola Quinto. Quinto (Beta) is in third position this evening with 9’58 » from the italian leader despite some electrical problem to his motorbike.

Sixth position for the best Turkish rider, Ejder Eristi on Ktm with 17’53 » at the moment from the leader : the Turkish must be very careful because Silvio Del Deo (Honda), follows him with just 5″ of difference. The English rider, Richard Kaye on Ktm close the first day with a good eight position in the overall ranking. 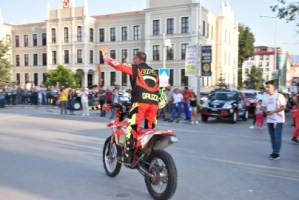 A very nice battle happend among the SidebySide and the difference between the first two in the ranking is already important: the Bulgarian crew of Tsanko Tsankov e Zornitsa Todorova is first with their Can Am and finished the stage with a total time of 1h 06’58 against 1h 25’05 of the french team of Yves Tartarin and Cedric Duple. It must be said however that for this new SSV with Suzuki engine it is the first appearance in a real rally raid and its driver is testing his Steenbok in the Transanatolia Rally in preview of other important competitions.

In the car category the Turkish teams are the best: at the first place in the evening ranking there is the Suzuki Grand Vitara of Mert Becce and Sertaç Tatar at the finish line in 1h19’29 »; the second one, the Mitsubishi Pajero of Benan Engin and Uğur Tepe are just 2’10 » behind.

The Trucks category sees Marino Mutti and Andrea Mazzoleni – on a Mercedes Unimog – faster than the others two Unimog : Mutti took advantage by a navigation error of Antonio Cabini who not only missed a note, but also fell in a puddle of mud from which it was impossible to get out on his own. Giulio Verzeletti already at the finish line at that time, had to go back to help the team-mate and in this way both have paid a delay that tomorrow they will try to catch up. 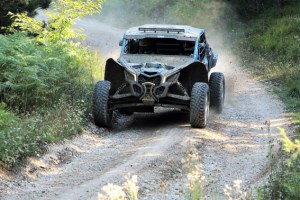 Tomorrow the second stage is a little bit longer than today. Starting from Haymana the stage will go to Meke Lake in a day long 382 kms and 2 special stages: the first has already been crossed last year and it’ll be difficult for navigation and length, since we speak of 165 kms. The second one it will be long 74 kms just to the bivouac of
Acigol/Karapinar.