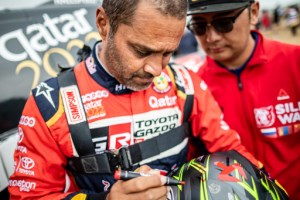 Overdrive Racing’s Nasser Saleh Al-Attiyah and French navigator Matthieu Baumel extended their outright lead in the 2019 Silk Way Rally to 37min 25sec after claiming a fifth successive stage win on the 364.59km timed section between Ulaanbaatar and Mandalgovi on Thursday.

Mandalgovi is the capital of the Dundgovi Province of Mongolia and lies around 300km south of the capital on the border of the Gobi Desert.

Al-Attiyah has been in a class of his own this week, as he closes in on a first ever victory for himself and Toyota at the gruelling Silk Way Rally. The Qatari beat closest rival Matthieu Serradori by 3min 07sec to claim the stage win and extend his outright lead over the chasing pack headed by China’s Kun Lui and Frenchman Jérôme Pelichet.

Dutchman Erik van Loon and Frenchman Sebastien Delaunay are crewing the second of the Overdrive Toyotas and are fighting back well from time delays on stage two. Van Loon was third fastest on the fifth stage as he continues to push his way back towards the top 15 with five stages to run in Mongolia and China. He was classified in an unofficial 21st overall after SS5.

Al-Attiyah won his third successive section with a stage win on the 243km stint into the Mongolian capital of Ulaanbaatar on Tuesday. The Qatari finished the special 6min 13sec in front of Russia’s Denis Krotov, despite a flat tyre, and extended his outright lead over Kun Lui to 21min 10sec.

The Qatari said: « Whenever we find ourselves in good conditions we try to push. We were trying to make a gap at the front. It is never easy to open the track but I trust my co-driver Matthieu. »

Van Loon suffered serious transmission issues on the second stage and lost his chance of winning the event. The Dutchman bounced back with the fifth quickest time on the third stage into the Mongolian capital but he was still in the lower reaches of the leader board.

The fourth special comprised a loop around the vast terrain to the east of Ulaanbaatar. In a day’s route of 476.96km, 470.19km were timed against the clock in the longest timed section of the entire event.

Overdrive Racing completed a 1-2 finish on SS4 with Al-Attiyah again the class of the field and completing the high-speed section 4min 13sec ahead of Van Loon. The stage win also enabled the Qatari to extend his overall lead over Lui Kun to 26min 41sec. Van Loon moved up to 32nd overall in the car category.

The Qatari said: « We did a good job on this long stage. There was no problem with the car and Matthieu did a good job with the navigation. We enjoyed the Mongolian landscape. It really was incredible. We are happy to be doing well at this rally. »

Saudi Arabia’s Yazeed Al-Rajhi and German navigator Dirk von Zitzewitz were forced out of the rally in the third Overdrive Racing car after terminal mechanical problems thwarted their progress on the second stage between Baikalsk and Ulan-Ude in ern Siberia.

Tomorrow (Friday) teams tackle a special stage of 408.15km in a day’s route of 411.75km between Mandalgovi and Dalanzadgad in Mongolia.

Dalanzadgad is the capital of the Ömnögovi Aimag area of Mongolia and is located 540km south of the capital and lies 1,470 metres above sea level.