The only Civic Type R TCR in the field was fielded by Fugel Sport, supported by Castrol, Honda Germany and JAS Motorsport, and claimed the win by one lap after a true test of endurance around the legendary 25.1km circuit in the Eifel region.

Dominik Fugel, Markus Oestreich and Cedrik Totz were joined behind the wheel by Honda Racing driver Tiago Monteiro, who was on double-duty over the weekend as he combined his 24-hour race effort with three WTCR races in his regular Civic Type R TCR.

After qualifying third in class, the car held position during the opening section of the race, but moved into the lead before quarter-distance. 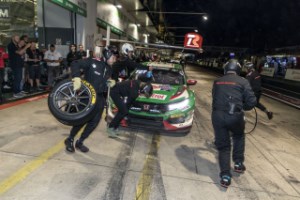 Stretching their advantage to three laps by the halfway mark, a number of minor issues led to a 25-minute pitstop during the night, dropping the quartet to third place, two laps off the lead.

But with everything still to play for as the sun rose on Sunday morning, all four drivers performed superbly, avoiding drama and lapping fast and consistently to re-take the lead with four hours to go.

Following an unscheduled and precautionary brake-disc change, brought on by the punishing nature of the Nordschleife, a nervous final hour ensued, but Monteiro was able to bring the car to the finish to claim a remarkable win, 10 years after Honda’s last official participation in the race.

Tiago Monteiro said: « I’m so happy to have this class win. The Nurburgring 24 Hours is a world-famous endurance race and I definitely felt the ‘endurance’ part this weekend. The Civic Type R TCR was fast, driveable and reliable all race and the preparation by Team Castrol Honda Racing was fantastic. Congratulations to everyone on a great job and thank you to Castrol and Honda Germany for involving me in this project. »

Klaus-Peter Kniedel, Team Leader, said: « It’s great to be in this legendary race for the first time in 10 years and to be able to celebrate this class win. The whole team has done an excellent job and the performance of the Civic Type R has been excellent right from the start. »