Overdrive Racing’s Vladimir Vasilyev capped another successful weekend for the Belgium-based team by finishing second overall in the three-day Italian Baja, round three of the 2019 FIA World Cup for Cross-Country Bajas.

The second all-Russian Overdrive crew of Viktor Khoroshavtsev and Anton Nikolaev quickly acclimatised to their new Hilux and set some impressive stage times. They were holding fourth place behind outright winner Orlando Terranova, Vasilyev and Czech driver Martin Prokop until the Russian sustained a heavy front impact on his Toyota on the final stage and retired with suspension and frontal damage to the car.

Heavy rain and difficult passes through the Cosa and Tagliamento rivers made conditions exceptionally difficult for crews, particularly the T3 Side-by-Side cars that were running without a windscreen and side windows. 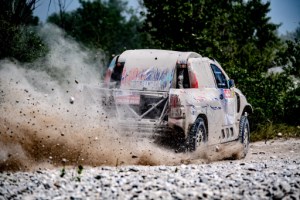 Action resumed with the first of three runs through the revised Barbeano selective section on Saturday morning and the competitive part of the route was reduced to 79.43km. The special ran from Spilimbergo to Morsano and back to Dignano.

The second fastest time enabled Vasilyev to move up to third overall behind stage winner and new leader Terranova and second-placed Przygonski. Khoroshavtsev was quickly getting used to running an Overdrive Toyota Hilux and the Russian climbed six places to ninth.

A resolute Vasilyev set the fastest time of 1hr 04min 52sec on the second run through the special and beat Terranova by seven seconds to move up to second place and reduced the Argentinean’s advantage to 1min 09.4sec. Khoroshavtsev was 16th fastest and slipped back to 13th overall.

Terranova redressed the balance on the third run to earn the fastest time by 43 seconds to take a lead of 1min 52.4sec over Vasilyev into the overnight halt. Khoroshavtsev was an impressive sixth and climbed to seventh overall.

The final day’s selective section that started and finished at Gradisca was also modified from the original and ran for 80.15km on two occasions.

Vasilyev clocked the quickest time of 1hr 01min 20sec on the opener to reduce Terranova’s lead to 1min 15.4sec heading to the regroup in Spilimbergo before the re-run of the special. Khoroshavtsev was on form and the fifth quickest time enabled the Russian to surge up the leader board to fourth overall.

Terranova held on to claim the fastest time of 58min 57sec through the final stage and was able to seal the win over Vasilyev by the margin of 4min 02.4sec with Martin Prokop coming home a distant third. But a heavy front impact cost Khoroshavtsev his fourth place and damaged the wheel and front-left suspension of the Toyota Hilux into the bargain. 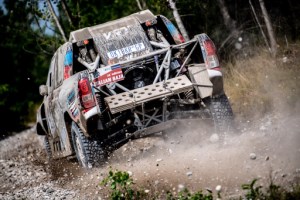