The South Racing Can-Am Team duo of Fedor Vorobyev and Kirill Shubin continues their impressive run of form to secure an emphatic victory in the T3 category at the Italian Baja, round three of the 2019 FIA World Cup for Cross-Country Bajas, in Pordenone on Sunday.

Can-Am Maverick X3s won five of the event’s six stages that were held in demanding weather conditions across river beds and melt water gravel plains in north-eastern Italy and Vorobyev reached the finish with a winning margin of 5min 01.5sec over the Spanish driver Santiago Navarro.

The win also enabled the Russian running under the Zavidovo Racing Team banner to move into serious contention for the T3 category of the FIA World Cup for Cross-Country Bajas after three of the eight rounds. He is currently locked in a fierce battle with Italy’s Michele Cinotto at the top of the points’ standings. 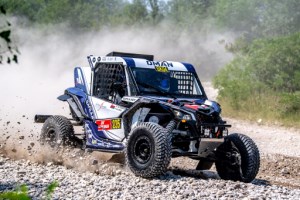 Oman’s Abdullah Al-Zubair was also running under the South Racing banner, but he and co-driver Faisal Al-Raisi collided with a tree on the final morning and lost out on a potential sixth place in T3.

« It was a good race for the team with Fedor Vorobyev winning outright and continuing to build on his experience and gain additional kilometres with the South Racing Can-Am Team, » said South Racing Can-Am Team’s managing director Scott Abraham. « The team won three of the five longer stages on the event, with a South Racing Can-Am also winning the Prologue. It was a great race for South Racing Can-Am as a brand, taking four of the top five spots at the end.
« It was a race that we learned a lot from for the two Polish crews. Michal Goczal had a strong comeback to win the last three stages but, unfortunately, we had a difficult race with electrical gremlins for Marek Goczal forcing him to retire yesterday. Then Al-Zubair hit a tree and retired on the last stage today. »

« The team now moves on to the Silk Way Rally with an entry for Austin Jones and then we are looking forward to continuing in the World Cup in Baja Spain, where we have Abdullah Al-Zubair, Fedor Vorobyev and a new driver, in addition to the Monster Energy Can-Am entry for Gerard Farres. »

The South Racing Can-Am Team started strongly on the opening 12.09km super special stage at Murlis on Friday evening with Can-Ams taking the top five spots with the stage win falling to Aleksandr Dorosinskiy of Latvia. 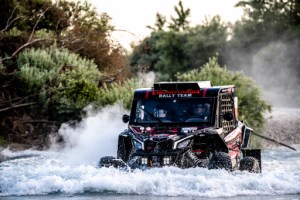 Can-Ams claimed three of the top five positions through the first of three runs in the 79.43km of the Barbeano stage on Saturday with Dorosinskiy of the SRT Team winning the stage to extend his outright lead to 3min 53sec.

Poland’s Michal Goczal went on to claim the stage win for Can-Am on the third of the runs through Barbeano, where Vorobyev hit the front for the first time and took a lead of 1min 23.5sec into the overnight halt.

Two passes through a section of 80.15km brought the competitive action to a conclusion on Sunday. Goczal held off Al-Zubair, Dorosinskiy and Vorobyev to win the opener, although the Russian was able to increase his overall lead to 3min 52.5sec.

The Pole was again quickest on the last stage to confirm fourth overall, but the second fastest time enabled Vorobyev to reach the finish with a winning margin of 5min 01.5sec over Spaniard Santiago Navarro.