Esteban Guerrieri led a double-podium finish for the Honda Civic Type R in a dramatic opening race at the Nurburgring, to increase his lead in the WTCR – FIA World Touring Car Cup.

The ALL-INKL.COM Münnich Motorsport driver, who had qualified on pole position, lost the advantage at the start, but held firm in second place throughout the three-lap race on the fearsome Nordschleife.

His fifth podium finish of the year allowed him to increase his advantage at the head of the Drivers’ standings to 28 points while Münnich Motorsport now lead the Teams’ title race by 73 points.

Team-mate and fellow Argentinian Nestor Girolami produced the most heart-stopping action of the race, going three-wide in the battle for the final podium position down the ultra-long Dottinger Hohe straight, but surviving intact.

A no-holds-barred battle for third on the final lap was resolved in his favour as he snatched his fifth podium finish of the year to sit fourth in the standings, just seven points away from second.

KCMG drivers Tiago Monteiro and Attila Tassi both made strong progress from their starting spots. 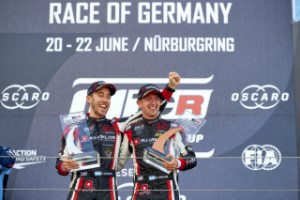 From 19th on the grid, Tiago fought hard for the final point, eventually missing out on the final lap by less than 0.3 seconds and finishing 16th.

After his 10-place grid penalty from qualifying was switched to Race One by event officials, Attila Tassi started 27th and last. But a terrific start allowed him to gain five places on the first lap.

He looked set to make up even more spots when several cars ahead of him collided on the grand prix loop on lap two, but he was an innocent victim as one of them drove into him anyway. He finished 20th.

Two races take place tomorrow, which will bring the WTCR to its halfway point.

Esteban Guerrieri #86 – ALL-INKL.COM Münnich Motorsport : « It’s fantastic to be on the podium again and to increase our lead in the Drivers’ and Teams’ Championships. I tried to close the line off at the start, but Norbi [Michelisz] was already there, so I settled into second. I drove as fast as I could while still keeping my front tyres alive because I knew that if he made a mistake, I needed to be close enough to attack him. Together we pulled a good gap on the cars behind us and showed strong pace. I couldn’t really ask for much more today. » 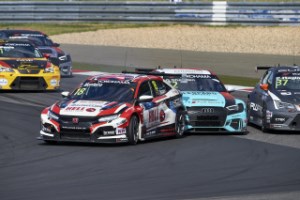 Nestor Girolami #29 – ALL-INKL.COM Münnich Motorsport : « What an amazing battle for third place on the last lap! I maybe should have been clear of the fight because I made a good start, but I was hit from behind at the first corner and lost some momentum and that meant I dropped to fourth. I caught [Frederic] Vervisch, but when I got side-by-side with him on the long straight, [Rob] Huff got a double-tow from us and passed us both. I tried so hard to stay close to Huff on the last lap so I could have a chance to pass. I got alongside on the straight, we were-side-by-side trying to take the draft away from the other one, but eventually I had the inside for the last sequence of corners. Making the podium that way is very satisfying. »

Tiago Monteiro #18 – KCMG : « I’m very pleased with the balance of the car today. The feeling was good and I could recover some positions on track from my grid position. Unfortunately I got a big hit from behind at the first chicane on lap two and it broke something in the right-rear corner, so the balance was completely off for the final two thirds of the race. Even with this, I was still quite fast, got into the points and only lost it on the last lap on the long straight when [Mehdi] Bennani and [Niels] Langeveld got a double-slipstream. I start higher tomorrow and I’m now confident of some decent points. »

Attila Tassi #9 – KCMG : « I got an amazing start and made up six or seven places, but then I got hit twice on the first lap in the GP loop and couldn’t make up any more ground. The key moment was at the chicane on lap two. Tiago was hit by [Gordon] Shedden, who broke his steering and just came across the track and into me. That damaged something on my car and my acceleration was really affected for the rest of the race. The braking and stability was very good though so I could catch the cars around me in the corners, I just lost out on the straights. I start third tomorrow so I’m really looking forward to it. » 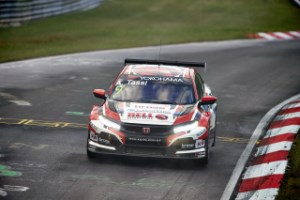 Dominik Greiner – Team Manager ALL-INKL.COM Münnich Motorsport : « Second and third places mean great points for the Teams’ and Drivers’ championships and we’ve increased our leads in both. There was some fantastic racing between Bebu and [Rob] Huff; close, but fair, which is exactly what you want in racing. It was heart-stopping at times, but great action for the fans in the stands and on television. The target for tomorrow is to ensure we leave our home race at the top of the points. »

Dario d’Esposito – Team Principal KCMG : « This is very good training for tomorrow. The pace of both cars was good on the first lap, though it’s hard to assess the ultimate pace because both Tiago and Attila were driving with damaged cars for the second and third laps. Tomorrow Attila starts in the top 10 for both races and Tiago is also much higher up the grid so the aim is to score points with both drivers in both races, which everyone here deserves. That would be a great fuel for the rest of the season. »