At this year’s Le Mans 24 hours, the two Jackie Chan DC Racing Orecas will sport special logos (see artwork below) to celebrate a decade of winning with Dunlop tyres.

The idea came from Sam Hignett, one of the partners at Jota Group, the company who run the Chinese entered cars in the FIA World Endurance Championship (WEC).

Sam explained the importance of collaboration in a winning team: « We believe in long-term partnerships and our relationship with Dunlop is truly that. It is a genuine partnership, rather than just a typical customer/supplier relationship. That matters to us as we strive for excellence. The Dunlop engineering team deeply embed themselves in our technical team and that has been key to the success we have enjoyed over the past ten years. »

The team go into the Le Mans 24 hours, which is the final round of the 2018/19 WEC season, in strong contention for the win and championship victory. Jackie Chan DC Racing cars have won five of the seven WEC races and the team have a strong record at Le Mans, most memorably with two epic wins in 2014 and 2017. The first of the wins was a thriller with the Jota Zytek climbing back from early race problems to take the lead in the final hour. However, it was the incredible 2017 race that most remember. 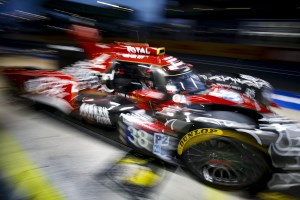 Sam recounts the dramatic race: « We came to Le Mans in 2017 with the goal of winning LMP2. We nearly won the overall race! Our team took the lead in the 20th hour and led until a recovering LMP1 Porsche regained top spot in the closing stages of the race. However, a class win and second and third overall will be a difficult record to beat. »

Another highlight from the Dunlop-Jota trophy cabinet was the 2016 overall championship win in the European Le Mans Series (ELMS). The team’s venerable Gibson/Zytek chassis had already had several seasons of racing before entering ELMS in 2012. However, Jota’s famed meticulous preparation and development kept the car at the top for another six seasons, winning the ELMS title with Jota partner Simon Dolan, former F1 driver Giedo van der Garde and current Ford GT star Harry Tincknell sharing the car.

Mike McGregor, Dunlop’s Trackside Support and Testing Manager agrees with Sam’s focus on the partnership; « We’ve enjoyed great success together and that’s been the result of co-operation, communication and transparency. We work hard to understand our partners, and Jota has always welcomed our input, experience and guidance in optimising the tyre and car performance. We look forward to another decade of success together. »