Overdrive Racing’s Nasser Saleh Al-Attiyah was made to work mightily hard for a second victory in Rally Kazakhstan and the outright lead in the 2019 FIA World Cup for Cross-Country Rallies.

The Qatari and his French co-driver Matthieu Baumel looked to be in control before the fifth demanding selective section through some of the remotest terrain in eastern Kazakhstan.

Lengthy delays for the crew in that loop stage to the north of Aktau City meant that the outcome went down to the wire and the Toyota Hilux crew had to stave off a fierce challenge from rival and Dakar legend Stéphane Peterhansel over the final stage to confirm a second win on the longest FIA event in the calendar.

Al-Attiyah eventually pressed on down the coastline of the Caspian Sea to the finish in Aktau City to secure a winning margin of 5min 21sec and repeat his 2017 triumph on the newest round of the cross-country calendar. The win gave him an unofficial nine-point lead in the Drivers’ Championship to take to the final round in Morocco in October.

Al-Attiyah said: « I am obviously very happy to win Rally Kazakhstan and now I am leading the championship. Now we are waiting for Morocco. This is a good year for us. Six wins in total and six races in which I compete. We controlled the pace well today. It was a nice stage, no problems. »

Saudi Arabian driver Yazeed Al-Rajhi was not able to repeat last year’s success in Kazakhstan but he and German co-driver Dirk von Zitzewitz claimed two stage wins, led after day one and recovered from a third-day roll and a series of punctures to reach the finish in eighth overall.

Dutchman Bernhard Ten Brinke and Belgian co-driver Tom Colsoul held third overall in their Toyota Hilux until issues on the fifth Aktau loop stage cost them a lot of time. They won the last stage but hefty time penalties dropped them out of the top 15 at the finish in Aktau.

After those penultimate stage problems that cost him third overall, Ten Brinke said: « We started that stage very fast and pushed a lot in the first part in the dunes. Then we broke a drive shaft and got stuck in the sand. It took us 30 minutes to get moving and then we had to change the drive shaft. Then we had a sensor alarm issue and had to stop and reset and then decided to quit the stage in case we damaged the car. »

It was an enthralling start to the event being organised by the Automotorsport Federation of the Republic of Kazakhstan for both Al-Attiyah and Al-Rajhi. They were separated by just two seconds through the opening 280.35km selective section from Aktau City to the bivouac to the south at Kenderley. 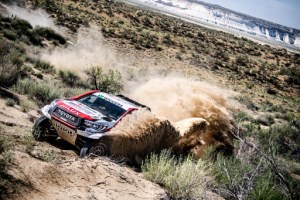 The Qatari carded a time of 2hrs 22min 03sec to snatch the outright lead from his Saudi rival. Defending World Champion Jakub Przygonski was just over three minutes behind the stage winner in third and Ten Brinke came in fifth with the third Toyota in a time of 2hrs 30min 26sec.

However, Al-Attiyah was awarded a one-minute time penalty for speeding in a restricted area and the overall lead was gifted to Al-Rajhi. The Qatari said: « Last year our car was seriously damaged on the first stage and we had to withdraw. Everything is going according to plan and I am optimistic, despite the one-minute penalty. »

The second loop stage around Senek, to the east of Kenderli, was the longest of the event at 414.12km and included stretches of sand dunes. There was no stopping the Qatari on this occasion, however, and the Overdrive Racing star stopped the clocks in a time of 3hrs 52min 14sec to set the fastest time and storm into an outright lead of 4min 32sec over Przygonski, despite another one-minute time penalty.

Despite losing time in the dust of a rival Russian competitor for over 60km, Ten Brinke was second fastest and climbed to fourth, but Al-Rajhi ceded 8min 39sec to his Arab rival after a series of flat tyres and slipped to third – 6min 41sec behind his team-mate.

The Saudi said: « We had three flat tyres and drove the last 30 kilometres to the finish with one wheel on the rim. »

The third stage of 327.47km also looped through the deserts and grasslands to the east of Kenderli and Al-Attiyah was in form again to extend his overall advantage to 11min 55sec with a second fastest time of the event thus far. The Qatari beat Ten Brinke by 3min 36sec, as the Dutchman moved up to second overall with Al-Rajhi rolling, losing 1hr 19min on the special and slipping to 16th overall after an additional four hours of time penalties were added to his time at the overnight halt.

The Saudi said: « We pushed and 30km into the section passed Peterhansel to follow Ten Brinke. Then, on a tight corner, the wheels went into a ditch and we rolled. »

After surviving tricky stretches of camel grass, Al-Attiyah insisted: « It was not an easy stage, very different to the last two days and more technical. »

The fourth selective section ran for 399.24km on a route that guided crews back to Aktau City from a start in Kenderli via the petroleum hub at Zhanaozen.

Al-Rajhi bounced back impressively from his previous day’s accident to set the fastest time of 3hrs 45min 53sec on the timed section that was held in muddy conditions in places after overnight rain. He beat Al-Attiyah by 8min 12sec, but the Qatari maintained an overall advantage of 8min 43sec over Przygonski, the Pole moving ahead of Ten Brinke and into second overall with the third quickest time. Al-Rajhi climbed to 11th position. 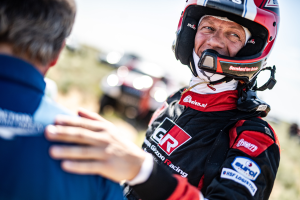 The Dutchman said: « We started second on the road and caught Nasser 100km into the stage. We were the first car into the dunes but then he passed us again before we retook the lead and ran together. It was good for Tom and me and we’re in a good position to fight for second. »

The penultimate stage looped through the deserts within close vicinity to Aktau City and 290.19km were timed against the clock. This terrain crossed the sandy dunes of the Kyzylkum desert that had not been used on the event before and sections of steppe roads and salt marshes.

Al-Rajhi was fastest again with a time of 2hrs 58min 00sec to move further up the leader board to eighth overall. Al-Attiyah continued to lead the event outright after setting the fourth fastest time of 3hrs 31min 29sec – a minor sensor issue showing fluctuating water temperatures on the Qatar’s Toyota Hilux and forcing him to stop on two occasions for around 45 minutes before he sustained a late flat tyre.

It was a dramatic day in the Kazakh deserts: Ten Brinke lost his place in the rally with a broken drive shaft, Przygonski ceded over an hour to his rivals and Peterhansel was promoted to second overall behind the leading Toyota Hilux. Al-Attiyah said: « I was happy to make it to the end. We lost time but this is racing and we accept what happens. After the problems, I found a new level of speed. It was more than flat-out and with no mistakes. »

Stage winner Al-Rajhi added: « The navigation was very difficult. It was hard to see and find the route. We had to do two loops to find the right road in one place and we had a puncture. »

Al-Attiyah took an advantage of 5min 38sec into the short 148.76km final loop stage to the north of Aktau City that also featured a section running along the shoreline of the Caspian Sea.

With nothing to lose after his issues on day five, Ten Brinke won the last stage in a time of 1hr 15min 08sec, but Al-Attiyah did enough to stave off any late pressure from Peterhansel to secure the victory for Overdrive Racing and take the outright FIA World Cup lead.