Race one got underway with pole-sitter Jens Reno Moller losing out to Lucchini’s #7 Ferrari 458 GT3, as the Italian swooped around the outside of the Reno Racing driver at Turn 1. Moller then came under pressure from behind but managed to hold on and began closing back up to the leader.

With 15 of the 45-minute race completed, Moller then had a moment on board the #11 Honda NSX GT3 Evo in the final sector, dropping to fourth behind StileF Squadra Corse’s Pavel Strukov and Kessel Racing’s Murod Sultanov.

The Russian duo, both running Ferrari 488 GT3s, then came together, with Sultanov forced into retirement with extensive damage. Strukov was handed a drive-through penalty and would later drop out of the race entirely.

This promoted Moller back to second, albeit around seven seconds behind Lucchini’s Ferrari. The championship leader reeled the Italian in with several consecutive fast laps, but ultimately fell short by two seconds over the line.

Behind them, AF Corse’s Mario Cordoni made up a number of places from the fifth row of the grid, passing team-mate Ken Abe and taking advantage of Strukov and Sultanov’s incident to claim the final spot on the podium. 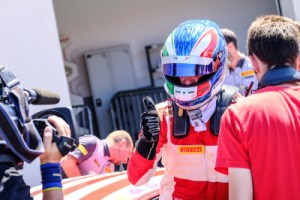 Robert Zwinger impressed on his Blancpain GT Sports Club debut, keeping his #888 Lamborghini Huracan GT3 out of trouble as he hunted down Cordoni’s #51 Ferrari 488 GT3. The HB Racing driver finished just a second behind the Italian, with his pace continuing to improve.

The #84 Ferrari 458 GT3 of Pete Mitchell was fifth and the lead StileF Squadra Corse entry, holding off the charging Mercedes AMG GT3 of Mowle in the final stages of the race, who made an excellent recovery from 18th on the grid to finish sixth overall and first in Titanium Cup.

Seventh was the second Mercedes of Capital Racing Team’s Denis Remenyako, who enjoyed a strong debut after initially dropping to ninth. The Russian took advantage of AF Corse’s Ken Abe, who was in a podium battle with Cordoni earlier, but struggled with grip as the race wore on and finished eighth.

The first of the Iron cup runners, Soenen, scored two overall points in what was one of his best Blancpain GT Sports Club races to date. The Belgian used his experience to manage his tyres well and finish ninth ahead of Frederic Fangio, who collected a point on his return despite an earlier spin.

Behind Mowle in the Titanium Cup was Dilantha Malagamuwa’s Lamborghini Huracan GT3, who collect his best finish in class, with Gerard van der Horst’s rounding out the podium in the newer spec Huracan.

This saw Sultanov, who had made his way back to second, retake the lead of the race with 30 minutes still to run. The Russian then came under pressure from race one winner Luigi Lucchini, but the Italian went deep into the chicane and stopped on the Mistral Straight. The BMS Scuderia Italia Ferrari 458 GT3 driver got going again, albeit in 10th.

The #17 Lamborghini Huracan GT3 driver improved his pace throughout the race and passed HB Racing’s Zwinger in the final stages for second. The Slovakian remained on his German counterpart’s tail until the chequered flag, scoring a podium in only his second Blancpain GT Sports Club start.

ERC Sport’s Lee Mowle completed another convincing fightback in his #44 Mercedes to fourth overall and second of the Titanium Cup runners, with Moller recovering to fifth and just 0.8 seconds behind the Brit.

Behind them, Capital Racing Team’s Denis Remenyako rounded off a strong debut weekend in Le Castellet to finish sixth, with AF Corse’s Frederic Fangio enjoying a better second race on his return to come home seventh on board the #55 Ferrari.

Lucchini climbed back to eighth, ahead of AF Corse pair Mario Cordoni, who struggled to match his race one pace, and Kriton Lentoudis. The Greek collected the final point in 10th on his maiden Blancpain GT Sports Club weekend.

Following McKansy and Mowle home in the Titanium Cup was Rinaldi Racing’s Vadim Kogay, despite receiving a drive-through penalty for causing a collision with the British GT convert’s Mercedes.

Stephen Earle scored his third Iron Cup victory of the 2019 season on board the #111 Ferrari 488 GT3, ahead of AF Corse’s Louis Philippe Soenen, who had an earlier spin, and Kessel team-mate Rick Peter Lovat.

Luigi Lucchini, #7 BMS Scuderia Italia, Overall Winner (Race 1): « The start was fundamental because I got into first position and tried to push hard. The Honda had a couple of mistakes, so I had an early advantage. I pushed throughout the entire race, because Jens was very quick despite spinning. It was a really fantastic and tough race. »

Lee Mowle, #44 ERC Sport, Titanium Cup Winner (Race 1): « I never really got a lap time in the qualifying and ended up way down on where we should be. Fortunately, the race is 45 minutes so you can just slowly make your way up. »

Louis Philippe Soenen, #50 AF Corse, Iron Cup (Race 1): « I am very happy with my performance in race one. We were consistent and the car is perfect, this is a great victory. »

Murod Sultanov, #23 Kessel Racing, Overall Winner (Race 2): « At the beginning I didn’t want to take any risks. It was a great result for Kessel Racing. The team fixed my car from race one and it felt fantastic. Thank you to them and the organisation for a good weekend. »

Coach McKansy, #17 HP Racing International, Titanium Cup Winner (Race 2): « That was much better than the first race. I improved all the time and was able to challenge at the end as my pace was good. I’m very happy with the performance. »

Stephen Earle, #111 Kessel Racing, Iron Cup Winner (Race 2): « In race one I went from 50 seconds behind to finish just under four seconds off the Iron Cup podium, but we came back in this second race and scored a much better result. The car felt good here, but the track was so hot that it was difficult with the grip. Looking forward to the next one at Misano. »