Rally officials have confirmed that the 12th Africa Eco Race will start from the Principality of Monaco for a fifth successive year on January 5th, 2020 and finish on the shores of Lac Rose in Senegal on January 19th, 2020.

Now seen across the world as the ‘Real Race to Dakar’, the brainchild of Jean-Louis Schlesser and René Metge continues to gain in popularity and there has been a surge in interest for Africa’s premier cross-country rally in the last couple of weeks. The route is being devised by former racers for competitors in car, motorcycle, quad and truck racing disciplines and further details are now available for the exciting new SSV Extreme Race category. 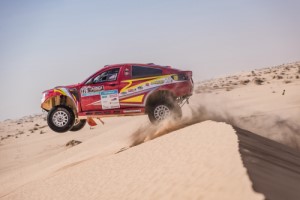 Africa Race officials have also released a short promotional teaser video for the 2020 event that will cross some of the most challenging and dramatic terrain that Morocco, Mauritania and Senegal have to offer. Twelve stages are planned in a route of around 6,000km before the traditional finish in Senegal.

The official rally start in Monaco will be from Quay Antoine 1st, in association with the event’s partner Stars’N’Bars, before the Mediterranean Sea crossing and the commencement of the on-stage action in Morocco.

The new SSV Extreme Race category will feature its own ranking, separate from the general classification, and competitors will battle for a new bronze trophy. The section will be open to vehicles that comply with FFSA T3.1 and T3.2 regulations for lightweight improved cross-country vehicles, in addition to SxS (Side-by-Side) machines.