He went into the weekend still waiting to make his race debut, after heavy rain during the 2019 season opener in Okayama last month led to the race being abandoned early.

Sacha took to the track for Q1 to try to get the #56 car into the second qualifying session. His fastest lap in the session – a 1m36.696s – was more than enough to advance as the second fastest time in the session.

« Qualifying was very good, it was awesome to get P1 in just the second race in the championship for both the team and myself.
« I thought I did a good job getting us into Q2 after going second fastest, before my team-mate got pole position for us in Q2. Not only was it great work from him though, but also the team to get us into this position. »

While the weather was dry for practice and qualifying, it took a turn for the worse on Saturday. Rainfall before the race meant that it started behind the safety car for the first two laps, with Hiramine taking control to start with.

Hiramine lost the lead on lap six of 110 after a tight battle to start the race. The rain started to get heavier and on lap 13 the safety car was deployed, before the race was red flagged three laps later.

Fortunately the worst of the weather left the circuit and the race was soon restarted. The #56 car was third in the GT300 class by the time Hiramine came in for the first of two pit stops. With the track drying quickly, Sacha went out for his first ever stint in a Super GT race on dry tyres.

After around 40 laps Sacha handed the car back to Hiramine after running in second place for the majority of his stint. While the drying track made it more of a challenge for Sacha, he was very pleased with how it went.

« It was a good stint. My lap times were consistent, which is key for these long races as that’s where I think you make the difference at the end.
« The tyres dropped off at the end of the run which made it difficult, but overall it was a good learning experience. It was the first time for me managing the traffic, the tyres and everything. » 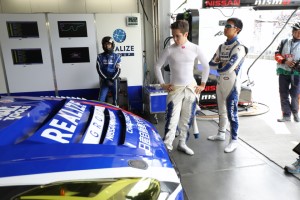 Unfortunately Sacha and Hiramine missed out on the GT300 podium, with the drop in temperature during the final part of the race making it difficult for Hiramine to keep the tyres warm.

Although disappointed, Sacha was very pleased with a strong performance from himself, his team-mate and the team. Along with pole position and fourth place in the class, the team’s mechanics were given the ZF Award for their efforts.

Sacha leaves Fuji third in the GT300 driver rankings with his team-mate, with the next Super GT round taking place at Suzuka at the end of May. He will next be in action for round two of the Japanese Formula 3 Championship at Autopolis on May 18-19.