Honda Civic Type R TCR drivers Nestor Girolami and Esteban Guerrieri aim to maintain their lock on the top spots of the WTCR – FIA World Touring Car Cup as it moves on to the Slovakiaring this weekend.

The ALL-INKL.COM Münnich Motorsport pair are first and second in the Drivers’ standings with Bebu heading table following a dynamic double win in Hungary, while their German outfit lead the Teams’ Championship.

With a combined three wins and five podium finishes from the opening five races, Bebu and Esteban have shown the prowess of the Civic Type R TCR on both bumpy, slow-speed street circuits and smoother, more conventional tracks like the Hungaroring.

The 5.9km Slovakiaring, located 30 minutes west of Bratislava, is another challenge altogether with a combination of fast, sweeping bends and two long straights placing a premium on high-speed stability and maximum velocity. 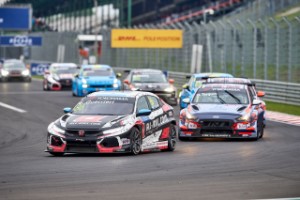 Bebu has happy memories of the track as it was the scene of his first World Touring Car race in a privateer Civic WTCC in 2015, while Esteban – races there for only the second time.

KCMG’s Tiago Monteiro is aiming to rediscover the form that made him the first Portuguese driver to lead an FIA World Championship with victory in the WTCC in Slovakia in 2016.

After a disappointing qualifying performance in Hungary that place him at the mercy of poor driving standards in the midfield, he and his team have been working hard to ensure he starts higher up the grid this time and avoids the melee.

Team-mate Attila Tassi scored a triple-points finish at his home event in Hungary – including a career-best 11th place – he is confident of more progress.

With all four Civic Type R TCRs carrying the maximum 60kg compensation weight in Slovakia, the Münnich and KCMG cars will be the heaviest in the series, making points-scoring crucial.

For the first time in the WTCR, the event will share top billing with the FIM Endurance World Championship; pitting the world’s top long-distance motorbike racers – including multiple Honda entries – against each other.

The addition of the bikes means that practice and qualifying will take place on Friday with the three races being held on Sunday. 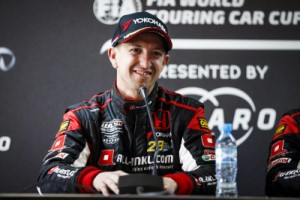 Nestor Girolami #29 – ALL-INKL.COM Münnich Motorsport : « It’s incredible to be leading the Drivers’ Championship only two races into my WTCR career, and for us to be at the top of the Teams’ points table too, but we all know that it’s only going to get harder from now. Our speed at the first two rounds means we will carry more compensation weight than our main rivals here, so that will make winning a tougher task, even if the long corners should suit the Civic Type R TCR well. The important thing is that when you’re not in a position to win, you still score big points and that has to be our target this weekend. »

Esteban Guerrieri #86 – ALL-INKL.COM Münnich Motorsport : « We’ve had a great start to the year with the win from pole in Morocco and then Bebu doing the same in Hungary, but this has put us in a position where we’re the guys everybody else is aiming to shoot down. Slovakiaring is a nice circuit with a good variation of high and low-speed corners, but this means you have to compromise on the set-up to make sure the Honda fast across as much of the lap as possible. Having two qualifying sessions on Friday will make things very tough because if you don’t maximise your opportunity in the first session, there’s not much time to change things. The compensation weight will definitely hurt us, but at least we’ll be the first team in the pitlane so if we get red flags in qualifying, it should affect us less than the others. » 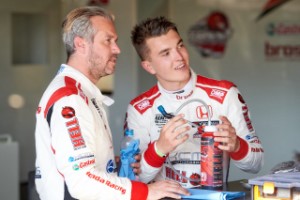 Tiago Monteiro #18 – KCMG : « After our promising start in Morocco, we had a tough time in Hungary and didn’t maximise the potential of the Civic Type R TCR, but that’s behind us now, we know where we went wrong and we can definitely use the lessons learnt to help us in Slovakia. I like the circuit, which is fast and challenging, and I’ve won there in the past, so I’m confident of my ability to get everything possible out of the car. What that will mean results-wise is anyone’s guess. The split, especially in second qualifying, between the top 20 cars has been almost nothing, so we all know it’s going to be a tough fight all weekend. »

Attila Tassi #9 – KCMG : « Hungary was a much better weekend than Morocco with three points finishes and a fastest lap, so I’m looking forward to Slovakia with the aim that we will continue to improve. We tested here a few weeks before the start of the season and found some good settings for the car, so provided the compensation weight doesn’t affect us too badly, I’m pretty confident we can take a step forward with our qualifying performances and use that as a springboard for our races. »