‘Bebu’, who was competing in only his second WTCR event, stormed to his first pole position and then led the 12-lap race from lights to flag to take the second win of the year for ALL-INKL.COM Münnich Motorsport and the Honda Civic Type R TCR.

Esteban’s result put him back in front in the Drivers’ Championship; five points clear of his nearest challenger. ‘Bebu’ is now third.

KCMG drivers Attila Tassi and Tiago Monteiro both finished the race carrying significant damage after each was a victim of multiple examples of contact from other cars during the early stages of the race.

Attila, who lives in nearby Budapest, qualified a career-best 18th, but dropped several places at the start as a result of contact.

He battled from 20th to snatch the final point – and 15th spot – on the last lap with a well-judged move at Turn 1 and then suffered a puncture on the warm-down lap; a legacy of steering damage picked up early on. 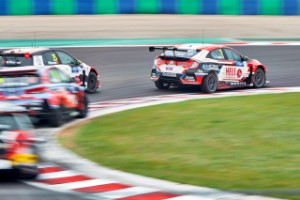 Nestor Girolami #29 – ALL-INKL.COM Münnich Motorsport: « I’m extremely happy to take my first WTCR win here in Budapest and to give the team and Honda another victory after Esteban won in Morocco. I knew that if I could start well, that was 99 per cent of the work done, and I think it was one of the best starts of my life. I can’t even begin to speak about how fantastic this team is, and in a series with so many high-quality drivers and cars, that’s a really big thing for us. Going forwards we have to be smart, work hard and keep pushing. »

Esteban Guerrieri #86 – ALL-INKL.COM Münnich Motorsport : « It’s fantastic to lead the championship and to stand on the podium at a time when my team-mate Bebu scores his first win. It’s a great day for the team. We tested here pre-season and the work we did has really helped us today. It prepared us in a very big way, showed us that this Honda can be very fast on circuits with every type of corner and just gave us a very good way of working. I hope tomorrow it can be me on the winners’ step of the podium. »

Attila Tassi #19 : « I’m quite pleased with the way I was able to come up from about 20th place in the first half of the race, to finish in the points and my passing move on the last lap was pretty good. It was a tough race though. I was hit by Mehdi Bennani on about the third lap and after that my steering was pointing at 90 degrees and it was tough to drive the car with this damage. I could feel that things were right on the edge, but I had to drive hard to try and make up time. I got a puncture on the warm-down lap, so I guess you can see how hard I had to drive. Tomorrow I’m hoping for much better. »

Tiago Monteiro #18 – KCMG : « I’m pretty disappointed with the result today. We had a few little things not quite work for me in qualifying, like track limits and traffic, and so I started 23rd. From there, it was always going to be a challenge to get into the points. It was a dogfight with lots of people having unnecessary contact. I was a victim of that and had to drive with damage for most of the race. I just need to start much higher up tomorrow and I’m sure we can avoid a repeat. »